Love of reading leads to success in National Geographic Bee 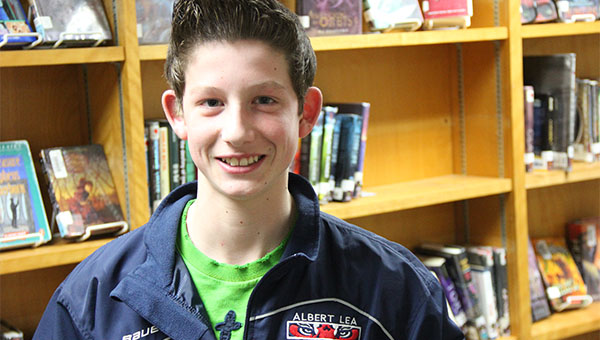 And when sixth-grader Joe Deyak reads, he likes to look up where places are. As a result, at the bee he often was able to select the best answer from the multiple choice questions offered, even if he wasn’t sure it was correct.

“Sometimes, there were answers that seemed more likely than the other answers,” Deyak said.

Call them educated guesses. He gave an example. One question asked which country had the least amount of Muslims in it. Out of four choices, he selected Ukraine and was right.

During each round, participants were knocked out only if they got two answers wrong. The only time Deyak give a wrong answer during the bee, held Jan. 10 at the Little Theater at Southwest Middle School, was during a round without multiple choices. In that round, participants had to give the answer. It was a question about a town in Australia, he said.

He ended up winning, however, on this question without multiple choices: What is lava called when it is underground?

Deyak said he likes to read science fiction and nonfiction. The A student didn’t prepare for the geography bee except for taking a routine pretest.

His favorite sport is hockey by far but he also likes football, soccer and golf. Frequently, he can be found playing hockey at the outdoor ice rink at Lakeview Park with his friends.

In band, he plays drums and the upright bass.

“I like the rhythm of drums. I am always tapping on things,” he said.

His mother, Lisa, is an English teacher at Albert Lea High School and the head volleyball coach. His father, Greg, is a physical therapist with Mayo Clinic Health System of Albert Lea. Joe has an older sister named Julia.

Lisa Deyak said they restrict the amount of time their children can watch television and play video games. They encourage reading. In fact, they like to read together as a family.

“He’s gotten a lot from the books he’s read that take place in different places in the world,” she said.

Lisa said Joe always has been a curious person. He often has projects. One time, as a third-grader, he wanted to make a log canoe. One step called for the use of fire, and Mom had to stop the project.

He doesn’t read one book at a time, either. He often is in the middle of reading an assortment of books. One of them is “The Adventures of Tom Sawyer.”

Joe said he hopes to be a doctor, more of a specialist than a general practitioner, when he grows up.

The next step in the National Geographic Bee is taking a test. The same test will be taken by bee winners across Minnesota, and the top 10 percent will attend the state contest April 4 at St. Cloud State University. The national bee is May 19-21 at National Geographic headquarters in Washington.

Interesting fact: His mother said, “He taught himself how to ride a bike when he was 3.”

• The winning question at the 2013 National Geography Bee in Washington was: “Because Earth bulges at the equator, the point that is farthest from Earth’s center is the summit of a peak in Ecuador. Name this peak.” The answer is Chimborazo.

• People can download an app for their cellphones or electronic tablets that offers geographic questions. It’s call GeoBee Challenge.