Memorial services for Marvin L. Widlund of Geneva will be at 1:30 p.m. Monday at the Bonnerup Funeral Service Chapel in Ellendale. The Rev. Richard Spande will officiate. Visitation will be from 6 to 8 p.m. Sunday at the funeral home in Ellendale. Military honors will be accorded by the Ellendale Servicemen. 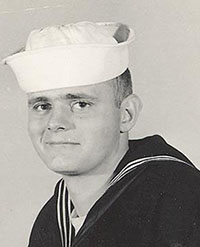 Marvin died on Wednesday, Feb. 12, 2014, as the result of an automobile accident in Blooming Prairie. He was 76.

They moved to the Geneva area in 1979 where they have made their home. Marvin was self employed with SW Acoustics, installing acoustic ceiling tile for many years. He enjoyed his work, anything nature, driving in the countryside and making people smile and laugh.

He is survived by his wife, Ruth, of Geneva, daughter Sarah (Thomas) Kerns of Geneva, son Eric Widlund of Norwalk, Iowa, grandchildren Lucas, Logan and Kelly Harden and many nieces and nephews.

Marvin was preceded in death by his parents; brothers Harold, Edward and Virgil; sister Lucille and Evelyn; and daughter Chris Widlund.