Northwood re-opened to residents after evacuation 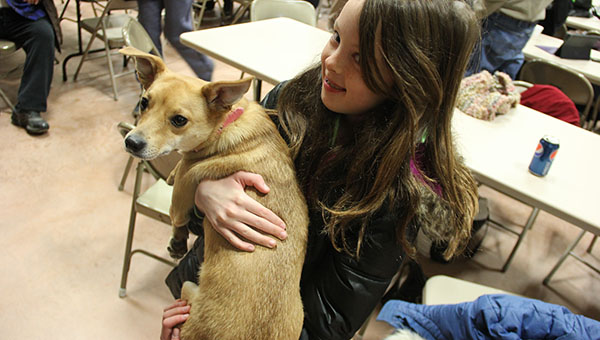 Evelyn Ocel, 10, holds a Chihuahua-terrier mix Thursday at the Kensett Community Center. She and other evacuees with pets were taken to Kensett City Hall. — Tim Engstrom/Albert Lea Tribune

NORTHWOOD — Many questions remain unanswered after a chemical fire caused the evacuation of Northwood Thursday morning.

The fire was at the Northwood Ag Products fertilizer storage facility at the airport on the east side of town off of Highway 105. There were concerns of sulfuric acid exposure.

Four people were treated at Mercy Medical Center in Mason City after coming to the hospital by private vehicles, according to a hospital spokeswoman. She did not know the extent of their injuries and asked that others seek treatment who were suffering from symptoms including vomiting, nausea or respiratory issues.

The Worth County Sheriff’s Office said residents were allowed to return to their homes shortly after 3 p.m. after the U.S. Environmental Protection Agency had finished its testing and said the air was safe.

The initial call of the fire came in at about 7:45 a.m., according to the Sheriff’s Office. There were several minor explosions, and a building was fully engulfed in flames. How the fire began is unclear.

By 8:20 a.m., authorities had evacuated Highway 105 to the north of Northwood city limits and began evacuating Northwood’s nearly 2,000 residents to neighboring communities.

While some people traveled to places such as Albert Lea for the day and night, many were evacuated to Kensett where authorities had set up evacuation centers.

At about 10 a.m., most downtown Northwood businesses appeared to be closed, with only a few cars parked on the streets. School buses could be seen traveling the streets carrying people, some of whom were wearing facemasks. Northwood-Kensett schools were already closed in anticipation of blizzard conditions.

Some of the few people on the streets in downtown Northwood were Antwan Martin, his wife and six children, driving around in their car trying to figure out where to go.

Martin said a man knocked on the door of his apartment at the Schoolside Apartments and told him to evacuate.

“We just moved here from Chicago,” he said. “We’ve never been through anything like this.”

After first arriving at Northwood’s Civic Center and finding no one there, they then headed to Kensett.

Volunteers and authorities had set up a main evacuation center at the Kensett Community Center, and residents with pets were asked to go to Kensett City Hall. At about 10:30 a.m., there were about 200 people at the community center and about 25 at City Hall.

Steve O’Neil, Cerro Gordo County emergency management director, said the community center was reaching capacity, and he anticipated another shelter to be set up at the Lutheran church in Kensett. The American Red Cross was also called in to assist.

The National Weather Service issued a civil emergency message about the fire, calling it “a dangerous situation.”

Kevin Baskin, a spokesman with the Iowa Department of Natural Resources, said the building was used to store material for crop dusting, and the main concern was herbicides and pesticides.

The cause of the fire is being investigated. The EPA is assisting in the case.

Short-term effects of sulfuric acid exposure include irritation of the eyes, nose and throat, teeth erosion and difficulty breathing. Long-term exposure may cause irritation of the skin and chronic inflammation of the nose, throat and bronchial tubes, according to the Centers for Disease Control and Prevention.

The Worth County Sheriff’s Office has not yet issued a press release about the incident.