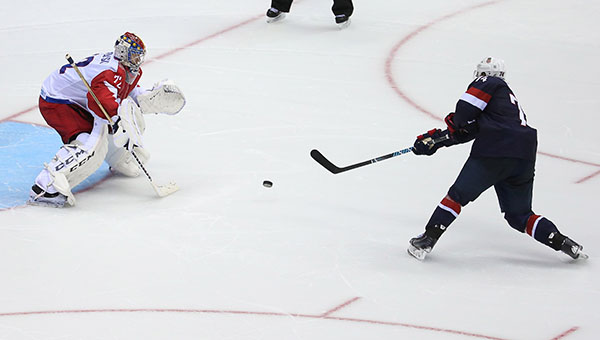 WARROAD — As T.J. Oshie was leading the U.S. men’s team to a dramatic 3-2 shootout win over Russia in Sochi on Saturday, his tiny Minnesota hometown was celebrating the Olympic success of yet another of its hockey players and wondering if he’d be the latest to medal.

Warroad, a town of fewer than 2,000 people that’s six miles south of the Canadian border, has the Midas touch: No U.S. men’s team has ever won a gold medal without having a Warroad player on its roster.

“I think it’s pretty amazing that we’re such a small town and we get such big opportunities,” said Sarah Casperson, 16, a sophomore at Warroad High School. “People here are so talented.”

Oshie, a 27-year-old forward on the St. Louis Blues, is one of two Warroad hockey players at the Olympics. The other is Gigi Marvin, a defenseman on the U.S. women’s team. She was Oshie’s high school classmate and the prom queen to his prom king in 2005, according to the Belleville (Ill.) News-Democrat.

The tiny town is filled with tributes to Oshie and Martin. Store windows are plastered with posters wishing the Olympians good luck, and huge U.S. flags hang everywhere.

Casperson joked that children in Warroad, which bills itself as “Hockeytown USA,” learn to skate before they can walk. But there is some truth to it.

“From the time kids are tiny their parents have them in skates,” said Marnie Swedberg, who owns a retail store in town. “From the time they’re 2 or 3, they’ve got them in the rink.”

There’s a long history of hockey greatness in this rural outpost, where the cold winters make for perfect ice-skating conditions. Of the town’s seven players who have played in the Olympics, only Oshie, who is competing in the tournament for the first time, hasn’t medaled.

Marvin, whose grandfather Cal Marvin coached the U.S. men’s team in the 1960s, won silver four years ago in Vancouver. And Henry Boucha, an Ojibwa Indian, won silver with the U.S. team in 1972.

Then there are the Christians. Dave Christian played on the Miracle on Ice team that beat the Soviet Union in 1980 en route to winning the gold medal. His father, Bill Christian, and uncle, Roger Christian, helped the U.S. win gold at the 1960 games and played in the 1964 games in Innsbruck, Austria. Another uncle, Gord Christian, took silver in 1956.

Whether Oshie can duplicate his predecessors’ success remains to be seen, though his four shootout goals on six attempts at the end of Saturday’s preliminary round game have put him in the spotlight.

University of North Dakota hockey coach Dave Hakstol, for whom Oshie played for three years, remembered his protege as an intense competitor who had a knack for rising to the occasion.

The bigger the stage, the better Oshie plays, Hakstol said.

“I don’t think anybody’s surprised by what he did today,” Hakstol said. “You saw he had a little grin on his face before he took each shootout. That’s just him out there having fun and competing.”

Oshie has said he tries to be unpredictable with his shot selections in high-pressure situations, and he leads the NHL with seven shootout goals in 10 tries this season.

While Oshie might not be a household name, hockey fans respect him as one of the best, his former coach said.

“Today he introduced himself to the world,” Hakstol said. “I think his personality will really endear people to him. He’s such a humble, fun-loving guy. And then when he gets on the ice he competes as hard — or harder — than anybody out there.”

After Saturday’s win, Oshie addressed the expectations of his fans back home.

“I’m definitely going to try to represent the town and obviously the country as best I can,” Oshie said. “There’s some big shoes to fill in there so I’ll just try to do my part.”