Funeral services for Paul R. Gold, age 85, of Albert Lea, will be at 11 a.m., Monday, Feb. 10, at First Lutheran Church. The Rev. John Holt will officiate. Interment will be in Hillcrest Cemetery. Visitation is from 4 to 6 p.m., today at the Bayview/Freeborn Funeral Home, and one hour prior to the service at the church on Monday. Online condolences are welcome at www.bayviewfuneral.com. 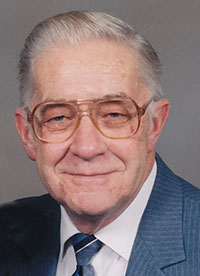 Paul Richard Gold was born on Nov. 17, 1928, to Russell and Nora (Nelson) Gold. He grew up in the Emmons and Manchester areas. He attended country school and graduated from eighth grade. Later in life, Paul returned to school and received his GED. Paul married Rose Marie Stolaas on June 11, 1950, at Grace Lutheran Church in Albert Lea. Paul and Rose farmed in the Emmons area for several years before moving to a farm near Hayward. In 1957 Paul and Rose moved to Albert Lea where they ran Paul’s Café.

Paul also worked for Erlandson’s Implement, Wilson & Co., and the North Star Gas Station. Paul’s love for farming brought them to the Glenville area where they farmed for about seven years before Paul began working for Miami Margarine. Paul retired in 1983 and he and Rose moved to Las Vegas, where they lived for the next 12 years. In 1997, they moved back to Albert Lea to be closer to their children and grandchildren. Paul enjoyed reading, playing cards, watching westerns and camping. He was a very kind and gentle man who was always concerned about others. He will be greatly missed by all who knew him.

Paul was preceded in death by his parents, Nora and Russell Gold; his mother-in-law and father-in-law, Henrica and Carl Stolaas; brothers Kenneth, Thomas, Gordon and Duane; sisters-in-law Arlet, Clara and Olga; and brother-in-law Ray.