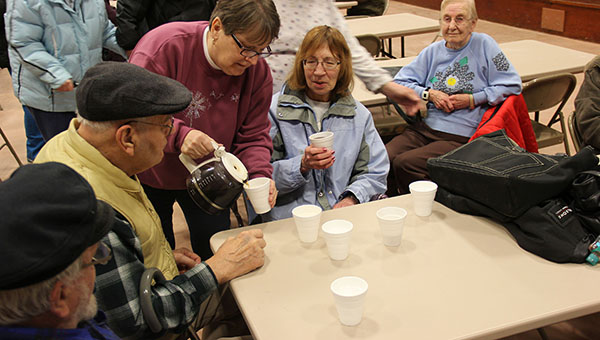 Jane Ritzert of Kensett, Iowa, pours coffee Thursday at the Kensett Community Center, a former school gymnasium. The people gathering there were evacuated from their homes in Northwood, Iowa, six miles to the north. — Tim Engstrom/Albert Lea Tribune

KENSETT — Juanita Davidson of Northwood began her Thursday like most other days.

She woke up, took her medications and ate breakfast with her husband, Omer.

Shortly after, their phone rang. 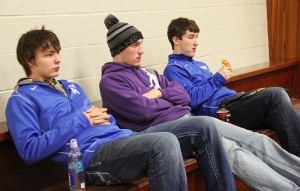 Three Northwood-Kensett students wait patiently Thursday at the Kensett Community Center, a former gymnasium. From left are Tom Fick, 15, Joshua Einertson, 16, and Nick Lombard, 17. Einertson and Lombard work at the grocery store in Northwood and said they had to place food in freezers and leave quickly. — Tim Engstrom/Albert Lea Tribune

“It sounded like an automated message,” Davidson said. “It said the town was asked to evacuate and to go to the community center.”

It was a call that set off a scurry of events for the couple and other Northwood residents after a chemical fire at Northwood Ag Products fertilizer storage facility at the municipal airport forced an evacuation of the community.

Davidson said she and and her husband listened to the message three or four times and then ultimately called the Worth County Sheriff’s Office for more details. During that call, they were directed to the Kensett Community center, a former school where officials were setting up an evacuation center.

She said there was a bad smell she couldn’t identify in her home — which is in northeast Northwood near the airport — and she didn’t think twice about whether to leave.

“I had a shot of adrenaline when I heard ‘evacuate,’” she said.

Davidson was the third person to sign in at the evacuation center at the community center Thursday morning.

with pets were at City Hall. Volunteers were distributing water and coffee and were ready to serve meals later in the day. 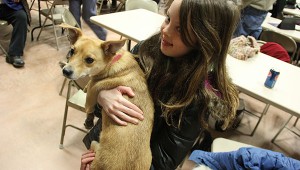 Evelyn Ocel, 10, holds a Chihuahua-terrier mix Thursday at the Kensett Community Center. She and other evacuees with pets were taken to Kensett City Hall. — Tim Engstrom/Albert Lea Tribune

Authorities evacuated residents because of potential sulfuric acid contamination, and as of Thursday afternoon four Northwood residents were being treated at Mercy Medical Center-North Iowa in Mason City.

Of the residents who were evacuated were 54 people from the Lutheran Retirement Home of Northwood.

David Willsher, a licensed practical nurse, said several employees who had worked overnight Wednesday at the nursing home stayed there to sleep because of anticipated blizzard conditions. After only about two hours of sleep, they were woken up and notified that there had been a fire and all of the residents needed to evacuate.

“I’m sure they’re nervous,” he said as he watched residents in wheelchairs being taken off of buses and led inside the building. “Getting up and being told there’s a fire, that’s traumatic.”

Eileen Amundson of Northwood was at the community center with her two children, Evelyn and Megan, her mother, and their dog, Star.

Amundson said she works for Hormel and was asked to stay home Thursday because of the blizzard forecast.

“This is kind of a funny turn of events,” she said. “But at least I can stay now with my mom and kids and dog.” 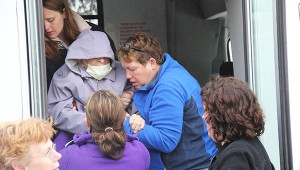 Alyssa Picht, behind, Donna Hovey, right, and Nicole Wahl, front, assist 100-year-old Margaret Godfrey down the steps of a bus the morning of Thursday in Kensett, Iowa. The women worked for Lutheran Retirement Home in Northwood, which had been evacuated because of an explosion at a fertilizer storage facility at the municipal airport. — Tim Engstrom/Albert Lea Tribune

She said she was amazed by people coming together to help others.

Willsher said he, too, was impressed with all of the people in the community and surrounding area who reached out to the nursing home offering assistance.

Peggy Julseth of rural Kensett got called in to help at the community center by her relative, who is the city clerk in Kensett.

Julseth, whose daughter-in-law is the city clerk in Northwood, commended all of the people who were helping.

Residents were allowed to return to their homes shortly after 3 p.m., according to the Worth County Sheriff’s Office.