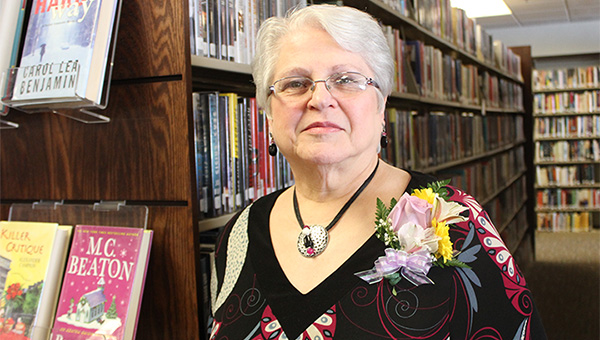 Library technician Gail Rasmussen retired after working for more than 45 years as a full-time employee.

Rasmussen said she started working part time for the library in 1965 when she was still in high school. At that time, it was at the former Carnegie Library on Washington Avenue.

She worked there for about 2 1/2 years, and in January 1969, she started full time at the present location on Clark Street.

“There was an opening, and I was running low on funds for college,” she said.

And she never left.

Human Resources Director Mike Zelenak said on the day of her retirement, Rasmussen had the longest tenure of any employee presently on the staff. He was unsure whether there were others with longer tenures in the past.

Rasmussen said she worked in the children’s library for four nights a week at one point and over the years has done everything from checking books out for people, shelving items, organizing the magazines and dealing with the library’s card catalog. 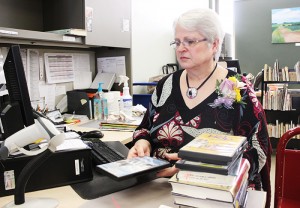 She noted the library has gone through some major changes since she first started, particularly in how books are checked out. She said it has gone from having library cards for patrons filed in drawers under the front desk to having cards with metal strips to now having a computer-automated system.

“I think the biggest thing was when we went to automation,” she said.

“I think it’s a great resource,” she said of the library. “We have wonderful computers that people can come and use. We have a lot of good books, magazines, music CDs — a lot of good things. You don’t even have to check anything out when you come here.

“It’s a good place for children to grow up.”

She said she has enjoyed getting to meet with library  patrons and the fact that she got to do something different everyday.

Denise Sande, who has worked with Rasmussen for 35 years, said Rasmussen has been a cheerful and pleasant person to have at the library.

How much reading does Rasmussen do outside of work?

She said she reads anywhere between five and 10 books a month and is always up later than her husband because she is reading.

She enjoys mystery and romance novels, including authors such as M.C. Beaton, Patricia Cornwell, Nora Roberts and Catherine Coulter, to name a few.

When she’s not reading, Rasmussen enjoys knitting, crocheting and playing on the computer.

She said she plans to read more and help out more with her grandchildren during her retirement. Someday she would enjoy going on a bus trip with her husband.

Interesting fact: Rasmussen made Christmas stockings for all of her grandchildren, a tradition passed down in her family.