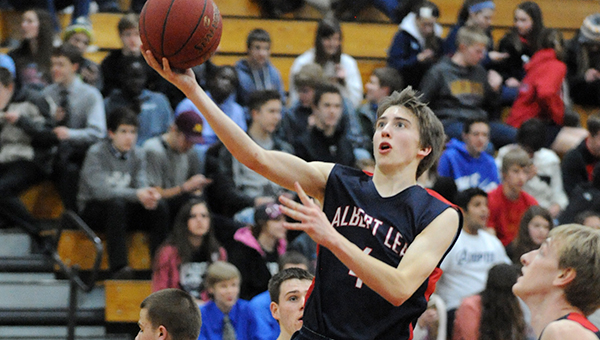 The Tigers lost 59-45 on Friday at home to the Panthers. 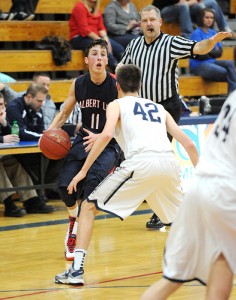 Tyler Vandenheuvel of Albert Lea looks into the paint to pass the ball to Dedoch Chan in the first half Friday against Rochester Century. Vandenheuvel scored 11 points in the loss. — Micah Bader/Albert Lea Tribune

Rochester Century (11-12 overall, 8-8 Big Nine Conference) is still on the wrong side of .500, but it’s on its biggest winning streak of the season. The Panthers won their last three games by taking down Faribault, Rochester John Marshall and Albert Lea.

Headed into Friday’s game, Rochester Century was coming off its biggest win of the year, a 65-64 home win over Rochester John Marshall. The Panthers snapped the Rockets’ eight-game winning streak and gave them their second conference loss of the season.

However, at Albert Lea, the Tigers took command early. After Rochester Century took a 7-5 lead, a put-back by Cody Scherff tied the game, and a 3-pointer by Tyler Vandenheuvel gave Albert Lea a 10-7 lead. A layup by Jakob Kilby gave the Tigers a five-point lead. But after that basket the drought began.

Rochester Century answered with an 11-0 run that morphed into an 18-3 run.

“I thought from start to finish we struggled to score in the halfcourt (set),” said Albert Lea head coach Lucas Kreuscher. “We didn’t handle the pressure very well. Too many turnovers. We played rushed. Credit Century.”

The Tigers showed life shortly before halftime to cut a double digit lead down to six points with free throws by Dedoch Chan and Cody Scherff.

In the second half, the Panthers’ lead grew to 14 points. Albert Lea cut it to 11 points at the 5-minute mark, but Rochester Century had the game clock on its side and no shot clock to worry about to finish off the Tigers.

Kreuscher said he’s looking for continued improvement in the frontcourt and backcourt.

Albert Lea lost the first meeting with Winona 52-42 on the road.

The last game of the regular season will be 7:30 p.m. Friday at Mankato East. Albert Lea beat the Cougars 58-57 at home the first time the two teams met this year.