Tigers scratch out win over Mankato-West 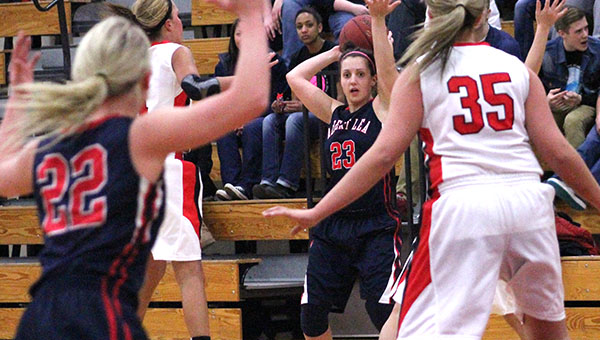 The Albert Lea girls’ basketball team leaned on defense and fundamentals Tuesday against Mankato West, and the Tigers were rewarded with a four-point victory.

Albert Lea took down the Scarlets 67-63 at home. The Tigers had 27 team rebounds, 13 team steals and shot 49 percent from two-point range.

“We’ve had a lot of really close games where we have not finished strong, so it was good to see the girls band together and work on finishing strong and have confidence and play well,” said Albert Lea head coach Lindsey Hugstad-Vaa.

“Most teams know that we have a great 3-point percentage, so they try to take that away,” Hugstad-Vaa said. “But we did a great job of getting into the lane and penetrating and pitching, which I was proud of. They looked confident and ready to go today.”

After the Tigers led 33-30 at halftime, the Scarlets came out gunning in the second half and found themselves at the free throw line frequently. Mankato West made 15 of its 19 free throw attempts. The Tigers went 9-14 from the charity stripe. The majority of those attempts were late in the half when Mankato West tried to extend the game.

“Their points were off of free throws, and our girls were working and moving the ball inside and outside,” Hugstad-Vaa said. “We looked like a strong team. We wanted to make sure that at halftime when they started coming back that we would come out strong and not let up. And the girls did a really good job with that.”

After the Scarlets built a small lead in the second half, the Tigers climbed back into the driver’s seat with clutch 3-pointers from Kortan and Rehnelt.

Albert Lea played strong defense throughout the game, especially in the first half. That defense led to multiple steals and transition baskets.

“It was huge,” Hugstad-Vaa said. “Woodside put pressure on their guards, and Francesca Eckstrom did a good job closing out. Kortan dug in, Rehnelt did a great job boxing out and Sarah Niebuhr and Caycee Gilbertson did a good job of getting around on their posts. That’s what we need, all five girls playing hard together. And they did that tonight, which was nice to see. Hopefully, they’ll keep buying into that. It doesn’t matter how much you score, you still have get stops.”

The Tigers also bit the Scarlets with the same inbounds play from under their own basket that left Rehnelt wide open at the top of the key for a jumper.

The Tigers were undersized at most positions, but it rarely factored into the game. Hugstad-Vaa said that they were used to being the smaller team.

“Most teams we play are bigger than us,” she said with a laugh. “We’re used to posts being stronger and bigger. We do face teams that are a lot bigger than us, so we just use our quickness and try to focus on our guard play.”