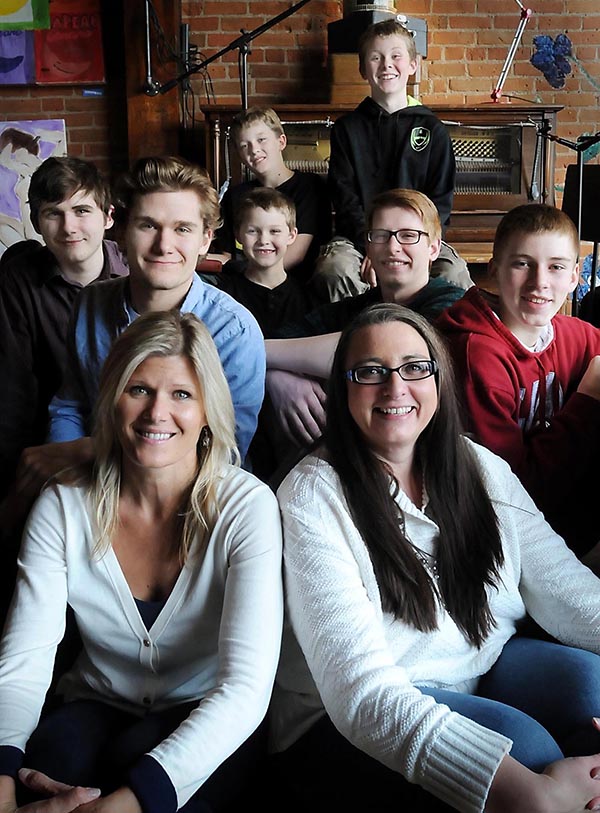 Jen True, left, read an article in The Mankato Free Press about Heather Sandland needing a kidney and decided to give her one. Both are healthy and happy today. They’re shown here with their children and nephews including: True’s sons Tanner Meihak and Tyler Meihak, and Sandland’s sons Ezra and Noah Sandland. The little guy in the middle is Avery True. Above Avery is his big brother Nova. Finally, Isaac. –John Cross/Mankato Free Press

To understand the dark place Jen True was at in her mind that day, the day her impulse to do the right thing would change lives — one must first understand the death that put her there.

Aric True, her free-spirited brother who offered his heart to anyone who needed it, took his own life after trying for years to fend off the demons that drove him to drug addiction. His death devastated and haunted her, almost to the point of depression. Even though she was getting professional counseling help, still  … she was struggling.

She read one article that day. It was about a woman who, like her late brother, had three sons. Heather Sandland, the article said, was enduring the grueling three-days-a-week routine of dialysis, the process where machines clean the blood of those whose kidneys can no longer do it for them. Eventually, without a kidney transplant, Sandland would die. And that just didn’t sit right with True.

She decided right there, moments after reading about Sandland’s plight, that she wasn’t going to let this case be another one where tragedy happens and people are left to wonder “what if …” and “if only …”

“I was reading this article and bawling my eyes out,” she said. “I thought of my brother’s sons, growing up without a dad. And I just decided that I’m giving this person a kidney.”

Before doing anything, True, 42, a Mankato Realtor, consulted the people who mean more to her than anything: her sons.

She explained everything and outlined her reasoning. Immediately they approved. So she looked Sandland up on Facebook and discovered they had a mutual friend. She reached out to that friend and did some background checking on Sandland. The report back was exactly what she wanted to hear. That mutual friend told her Sandland was a good mom, a hard-working woman, and that she’d overcome a lot as a single mother.

“I sent her a friend request that night,” True said. “But I went to bed saying, ‘Please someone talk me out of this.”’

Sandland, 43, meanwhile, had no idea why True would want to engage via Facebook. Then, a few days later, an email came that explained everything.

A little background on Sandland: She’s a little on the shy side. For months she knew she needed help, but it took her sister Kristen Flowers to call the newspaper and convince a reporter that a story on a woman who needed a kidney would be a good idea. Sandland, for her part, wanted to spread the word about organ donation, but never dreamed she’d be center stage.

“For me, I’ve always been a strong single mother, and it’s hard to accept help,” she said. “I don’t like to draw attention to myself. It was hard for me.”

So when a stranger emailed saying she wanted to give her a kidney, Sandland was surprised. But she didn’t get her hopes up. Others had been tested, too, but so far no one was a proper match.

“She said she was going to get tested, but I didn’t get really excited,” Sandland said. “I did think it was cool, though, that she’d read the article and wanted to help.”

True’s next step was to get tested to see if she’d be a good match. Which she was. When word came back that she was a good match, she was sitting in her office at work. She wept, and quickly sent a message over Facebook to Sandland.

Next she had to meet with the transplant team. Everything went fine until she met with a social worker. After pushing True on all the factors going into her decision to donate to a stranger and all the stressors in her life, the momentum hurling her toward a surgery date suddenly stopped.

Of course, the subject of Aric came up, as well as how hard his death had been on True. The social worker’s recommendation was for True to wait until the one-year anniversary of Aric’s death. Also, they wanted her to continue seeing a therapist. Which is exactly what she did. But she wouldn’t need to wait as long as that social worker suggested.

Meeting challenges was nothing new for True. Like Sandland, she’s a single mother. And like everyone else, she’s experienced ups and downs in her career. Mostly, though, she said she discovered her struggle to deal with the loss of her brother hadn’t made her weaker —it made her stronger.

In the months between her decision to donate and the actual surgery, she and Sandland got to know each other a little. They discovered connections between their lives they’d never realized.

The house in Mankato where Sandland lives, for example, is next door to where Aric lived. They both have sons attending Mankato West High School. Both believe God brought them together, first with Kristen seeking media coverage for her sister, then with True reading the story, then with everything during the pre-screening/testing phase matching perfectly. True also believes Aric’s spirit has been with her throughout the ordeal.

Through continued counseling, True’s therapist became convinced True was ready to go through with this. So she penned a letter on True’s behalf, and the transplant team relented. Surgery was scheduled.

They arrived at the hospital early on Nov. 26. True, the donor, would go first.

“When they wheeled her away, that’s when it hit me,” Sandland said, who was prepping for surgery nearby.

“You saw them wheel me away?” True asked.

For four hours the transplant team worked to remove True’s kidney — a kidney a doctor would later reportedly characterize as “the healthiest kidney I’ve ever seen.” Then it was Sandland’s turn. After a few hours — and months of preparation and perhaps some serendipity— it was all over. A few days later it was Thanksgiving, and the two spent the holiday together eating a hospital room ration of turkey, mashed potatoes and stuffing.

Side effects were heavy for True. She felt ill for about a week, then started to feel better. She worked shorter days at first, then gradually got back to her typical, hectic Realtor’s schedule.

Sandland was required to stay in the hospital for a few days but felt great by the time she left. In fact, it didn’t take long for her to notice just how different life would be with a new kidney. Being in renal failure for so long had sapped her of so much energy that she’d forgotten what it was like to feel “normal.” Her work improved, her color improved, and she was even able to participate in her church’s Singing Christmas Tree event, one of her favorites.

During a performance, True showed up with her mother and the two scrambled to find a seat. It was the first time she’d seen Sandland since leaving the hospital. Unbeknownst to her, she’d sat down right next to Kristen Flowers, Sandland’s sister, the one who started it all with a phone call to the newspaper.

She remembers sitting there with her mother and looking up at Sandland, singing with the choir, and feeling the weight of the moment hit her.

The experience, she said, has changed her.

Because of that, Sandland can too.