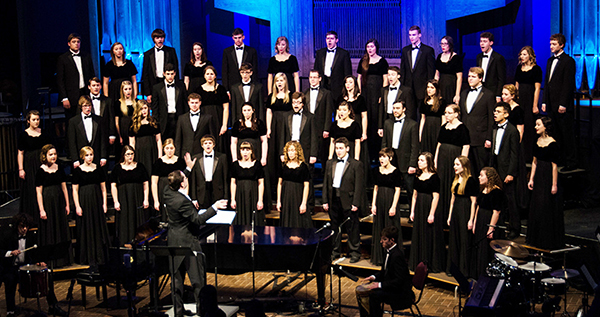 Music will be in the air Friday night in Albert Lea. Carthage Choir, an elite vocal choral ensemble from Carthage College in Kenosha, Wis., will take the stage at 7 p.m. at First Lutheran Church.

Music professor Eduardo Garcia-Novelli is the conductor of the Carthage Choir and director of choral activities at Carthage. Garcia-Novelli is a native of Argentina and most recently director of choral activities at Lamar University. After serving for six years as assistant director of the National Young People Choir of Argentina and a fruitful high school choral directing career in Buenos Aires, including several international tours, he moved to the United States to pursue graduate studies.

A donation will be accepted to offset the cost of the tour.

• The play “Anchors Aweigh: A Farce at Sea” will be at 7 p.m. at Southwest Middle School.

• A concert will be at 7:30 p.m. at the Marion Ross Performing Arts Center. Becky Schlegal, a soprano, sings songs based on her life experiences.

• The Albert Lea Moose Lodge will have an all-you-can-eat meal with entertainment by “Terry-okie.”

• A karaoke contest will be at 8 p.m. at Big Island Grille & Bar. The top two finalists of the contest qualify for the championship on May 31. Preregistration is required but sign up is free.

• The Albert Lea Eagles Club will have music by “DeAnn Randal.”

• The Elementary Secondary Student Art Show will be from 10 a.m. to 4 p.m. at the Albert Lea Art Center.

• Author Katie Godfrey will be reading and signing copies of her book “Sweety Finds Her Family” from 2 p.m. to 4 p.m.

•A basket night and auction will be from 5 p.m. to 8 p.m. at Wedgewood Cove in Albert Lea. Tickets are $7 and are available at Hy-vee customer service or at the door.

• Winter beer games will be at 6 p.m. at America’s Best Value Inn. There will be two player teams. Players must be registered by 6 p.m. There is a $5 entrance fee.

• “Arlen & Butch” will be at the Albert Lea Eagles Club.

• “Megaforce Karaoke” will be at the Albert Lea Moose Lodge.

• The Elementary Secondary Student Art Show will be from 12 to 4 p.m. at the Albert Lea Art Center.

• A Lenten organ recital will be at 3 p.m. at Salem Lutheran Church. Robert Tewes is slated to perform.