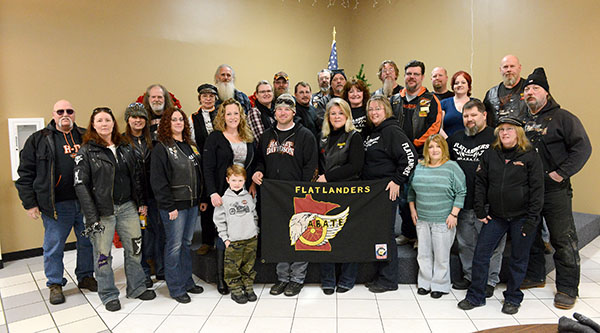 Members of the Flatlanders chapter of ABATE of Minnesota gather at the Moose Lodge in Albert Lea on Jan. 25. – Brandi Hagen/Albert Lea Tribune

It’s time to realize that the stereotype of all motorcyclists being big, bad and up to no good is just that — a stereotype.

That’s what ABATE wants people to know. ABATE is a motorcycle rights organization, many locals are unaware that there is a local chapter called the Flatlanders.

The Flatlanders are in their 25th year. Their region spans from Blue Earth to the east side of Austin and has an active core group of about 45 members.

“There’s also a lot of members who join the chapters, not just Flatlanders, but all over the state that pay the membership fee just to support,” member Jacquie Deml-Mauseth said.

The acronym ABATE is spelled out in different ways in different states, but in Minnesota it stands for American bikers for awareness, training and education. It comprises advocates of motorcyclists whether they own a bike or not.

The group is highly concerned with lobbying at the state level, but also locally and nationally.

“Our main focus is on the rights of all motorcyclists,” Flatlanders chapter representative Virgil Legried said.

Legried said the organization successfully pushed for the passage of a road guard law.

The law allows a road to be temporarily blocked off so that a procession of bikers can pass through an intersection without getting stopped by traffic control devices. The rules within the law are still being written with hopes of being ready by summer 2015, Legried said.

Another political issue ABATE is passionate about is helmet laws.

On March 12 anybody who rides a bike, trike or is in support of riders will gather for Biker Day at the Capitol.

“You’re given a special session with your representatives from your district,” Deml-Mauseth said.

Legried said this year at the state level one of the issues to be addressed is an enhanced penalties bill.

In addition to its lobbying, the Flatlanders chapter does a lot of work to increase motorcycle education and safety and it does charity work to help surrounding communities through bike runs and other fundraisers.

One of those runs is the Buddy Bear Run. The chapter gives out biker-looking teddy bears to fire departments and ambulance personnel to give to children.

For example, if a family’s home is on fire, a bear may be given out as a child watches it burn.

“This is the first new, clean thing they get,” Legried said.

The Buddy Bear Run is done each year on a Saturday in August. Last year there were 22 bikes on the run and 76 bears were given out. This summer the chapter will be giving out 96 bears.

The chapter has been known to help with benefits, hold chili feeds and donate to Toys for Tots, food shelves and other people and groups in need. The Flatlanders’ next chili feed is at the Moose Lodge in Albert Lea on March 15. The proceeds will help pay for the new buddy bears.

One of the ways the chapter helps to educate the public is by doing something it calls WashOut. On a Saturday in May, which is Motorcycle Awareness Month, the chapter will go to a rest stop on Interstate 90, wash windows and hand out literature.

“The idea was there long before we were involved,” Legried said.

It also has a program called Share the Road in which it offers DVDs and other materials to give to schools about motorcycle awareness.

Deml-Mauseth said ideally the chapter would like to go to those schools and driver’s education classes and speak to the students, instead of just sending them materials.

“It’s all about making people aware,” she said. “We aren’t that little and invisible.”

One other program to mention that the Flatlanders chapter runs is Dial-A-Ride. The program runs from April 25 into October.

On Friday, Saturday and Sunday nights anyone who needs a ride home after a night of fun, instead of riding their bike home can call an ABATE member to give them a ride home and store their bike.

“You don’t have to be an ABATE member either,” Deml-Mauseth said. “Anybody anywhere can use it.”

The program is not promoting drinking, but rather to keep people who ride and those around them safe.

Deml-Mauseth and Legried said the chapter would like to see an increase in members and also to do more fundraisers. The chapter does about five rides a year and its members participate in runs that other chapters hold, too.

“We are very active,” Deml-Mauseth said.

The Flatlanders meet once a month. The chapter can be found on Facebook at “Flatlanders Chapter, ABATE of Minnesota.”