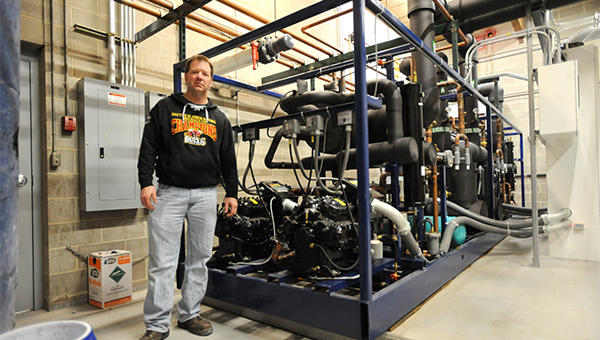 Jim Osmundson, the facilities maintenance supervisor at Albert Lea City Arena, stands next to the Copeland compressor and Ralinktech refrigeration system for the main ice sheet at the arena. Because of the installation of the system five years ago, Albert Lea City Arena will not be affected when the R-22 coolant is phased out. — Micah Bader/Albert Lea Tribune

Saving the ozone can be expensive, but Albert Lea City Arena avoided the financial crunch.

The cost that many ice rinks face is associated with Chlorodifluoromethane, a coolant also known as R-22. Because of its ozone depletion and global warming potential, the federal government plans to phase out the gas over the next six years. 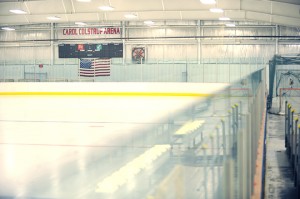 According to a report from the Associated Press, dozens of arenas in Minnesota will be forced to upgrade cooling systems that can cost from $100,000 to $1 million.

“The refrigerant being phased out — that’s been going on for years,” Osmundson said. “They already had the dates set when I was going to school from 2005 to 2007.”

“I was in Wisconsin 20 years ago, and we’d have meetings about planning for this back then,” he said. “It’s been a number of years that it’s been planned to disappear.”

Albert Lea City Arena has two ice sheets. A $400,000 cooling system in the main arena was installed five years ago to replace an aging system installed in 1976 when the building was constructed. Neither system uses R-22. Instead, the compressors use 404-A and R-507.

“We were lucky,” Furland said. “We had Jim, who was qualified, to study up on this beforehand so we did get the right refrigerant.”

The phase-out does not only affect ice rink cooling systems. It also affects some home air conditioning systems. The demand for R-22 will stay the same, but the supply will go down when it’s taken out of production. Therefore, it will become scarce, and the price will go up.

“It’s going to cost people more to keep the units that they have and to add refrigerant to them (if they use R-22),” Osmundson said. “You’d be better off replacing the whole thing.”