Albert Lea Kiwanis clubs receive grant to give out 1,200 books 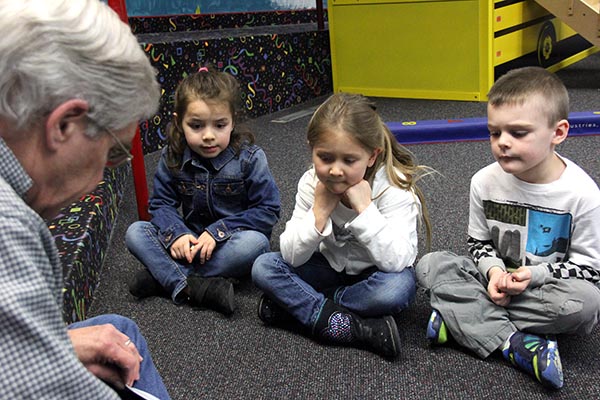 Four area Kiwanis clubs have received books through a grant and have been working to promote reading at home.

“We wanted to work to promote reading for preschool-age children, in particular, because we know how crucial that age is in terms of development,” said Darryl Meyer, lieutenant governor for Kiwanis clubs in Region 6.

The clubs have been sending members to read to children. At the end of the reading, the children get a book to take home.

“It’s been really great because we get to form that connection,” said Kim Nelson, member of the noon Kiwanis Club and director for The Children’s Center.

Nelson added that the children have been excited to receive the books.

“At one of the Head Start classes we read to, the children were really surprised they got to keep the book,” Nelson said. “We had to tell them ‘Yes, you get to bring this home.’”

By the time they are done, the clubs will have given out 1,200 books to area children. So far, they have hosted about 70 readings and plan to continue.

“I think the readers have as much fun as the kids do,” Meyer said. He read a story about a pet boa constrictor to a few students at The Children’s Center on Thursday.

Meyer laughed as he recalled a book about a Siamese cat who thinks he is a Chihuahua and uses made- up Spanish words. During a reading, a boy who spoke Spanish corrected the book.

Meyer said the project began when the clubs were brainstorming ideas of helpful projects for the community. They wanted to promote literacy and thought a book drive would be a positive way to encourage students to read at home.

Members of area Kiwanis clubs formed a committee who worked with the Southern Minnesota Initiative Foundation to secure a grant. Each of Albert Lea’s four clubs was represented with two members.

Nelson and Meyer were both on the committee.

“It really been a collaborative effort between each of the clubs,” Meyer said.

SMIF was impressed by how the clubs worked together, Meyer said. Next year, the clubs will distribute an additional 1,400 books to area children.