Memorial services for Allan Bernard Kleinpaste, 95, of Albert Lea, previously of Hollandale, will be at 11 a.m. Friday at Hollandale Reformed Church in Hollandale. The Rev. Neil Ohm will officiate. Visitation will be one hour prior to the service at the church. Interment will be in the Hollandale Cemetery on June 14. 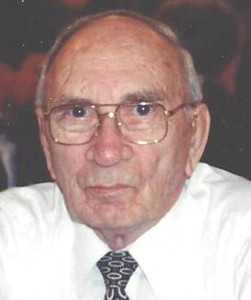 Allan lived most of his early life in Hollandale. He entered the Army in January of 1942 and fought on the western front in France, Belgium and Germany. He married Barbara Jean Hanson on July 3, 1942.

He enjoyed life by singing, playing cribbage, whistling, mowing the lawn and joking around with friends and family. He was deeply loved by his family.

Allan was preceded in death by his daughter, Sally Ann; parents Peter and Kate; brothers Harold and Peter Jr.; and sister Grace Atkins.

Memorials can be directed to Hollandale Reformed Church in Hollandale.