Funeral Services for Andrea “Andy” Joyce Flemming, of Moscow, Minn., will be at 2 p.m. on Friday at Oakland Lutheran Church in Oakland. The Rev. Matt Williams will officiate. 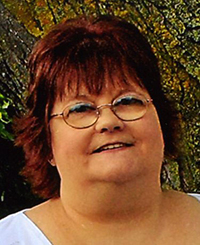 Interment will be in Fairview Cemetery at a later date. Friends may visit with family one hour before services at the church.

Andrea died unexpectedly on Monday, March 3, 2014, at Mayo Clinic Health Systems in Austin. She was 58.

She was born on March 16, 1955, in Austin, the daughter of Richard and Bernice (Kolden) Ruble.

She also attended the Minnesota School of the Blind, St. Mary’s in Minneapolis for Occupational Therapy training and Rochester Community College for nurses training.

She married James Flemming on April 12, 1975, in Oakland. When they were first married, they operated a resort near Faribault. After a couple years, they moved and made their home in the Moscow area.

Andy had worked at Viracon, and then at St. John’s Lutheran Home in Albert Lea for more than 20 years as the activities director.

Andy was diagnosed as “legally blind” but she never let that hold her back. She continued to persevere and worked around her difficulties.  She was extremely creative and loving, making her main focus her family. She loved spending time shopping, eating out and laughing with “the girls,” meaning her nieces and great nieces.

Andy will be fondly remembered as one who loved to laugh, enjoyed “spooky stuff – especially Halloween, and had a huge collection of wolves and Santas.

Her dogs were her pride and joy and greatest passion. She always had a stack of pictures ready to show anyone that would look at her special pet friends.

Andy will be greatly missed by her husband of 38 years, Jim Flemming, sister Cheryl Schewe and brother Emerson (Nikki) Ruble all of Moscow, mother-in-law, Rose Flemming of Owatonna, and many brothers-in-law, sisters-in-law, nieces, nephews, great nieces and nephews.

She was preceded in death by two children in infancy, Martin and Angela, her parents and her father-in-law, Walter Flemming.