“Everything is nearly copacetic. I skipped a flat rock across the lake. It’s much easier to do that when the lake is frozen over. My brother Cranston lives in the Twin Cities. The state highway department issued a travel warning due to a snowstorm and bad road conditions. They advised that anyone traveling in blizzard conditions should be sure to have the following: Shovel, blankets or sleeping bag, extra winter clothing including coats, hat and gloves, water, 24 hours worth of food, de-icer, rock salt, flashlight with spare batteries, road flares or reflective triangles, 5-gallon gas can, first aid kit and booster cables. Cranston said that he felt like a complete idiot when he got on the bus that morning. Pop fixed the ceiling fan. Ma had been after me to do it, but I forgot. Pop scratched his forehead on one of the blades. Then he cut both hands on a sharp screw. On the way down the stepladder, he missed the last two rungs and twisted his ankle. He limped into the kitchen, looking pitiful, while Ma was doing the dishes. He was covered in dust and blood.”

“What did your mother say?” I inquire.

“Ma took a good look at poor Pop and said, ’Are those your good pants?’”

In these parts, a blue jay is an everywhere bird. An elegant creature, a jay makes many sounds, the most recognizable is likely its loud “jay” cry. Their whistles are great, but my favorite utterance of the blue jay is the “queedle, queedle, queedle.” The jay makes this call while appearing to be doing deep knee bends, raising and lowering its body rapidly. It’s as if it’s in one of those exercise classes that features loud music.

A customer of this column forwarded a short poem by Jonathan Greene of Kentucky. It’s untitled. “Honored when the butterfly lights on my shoulder. Next stop: a rotting log.”

A testament as to how nature puts us in our places.

Information overload is the bane of the beginning birdwatcher — as anyone knows who has flipped through 40 species of sparrows in a field guide. What if an app could quickly tell you which birds are most likely based on your location, date, and a brief description? That’s what Merlin Bird ID does. And it’s free.

The Cornell Lab of Ornithology has released a free app to help people identify 285 birds in North America. Created with support from the National Science Foundation, the app asks five questions, and then displays photos of birds that match your description — customized to your location and time of year.

The app is the first to use data from the eBird citizen-science project to select the birds found within a 30-mile radius of your location at the time you see the bird.

Birders trained Merlin to understand how people see and describe birds. They’ve contributed more than 3 million data points that Merlin uses to deduce which birds are the most likely based on people’s description of color, size and behavior.

The app records your response when you confirm a seen bird, enabling researchers to identify successful interactions and improve Merlin’s performance over time. It also displays photos, ID tips, sounds and range maps for each species.

Merlin Bird ID app covers 285 of the most common birds of North America (more on the way). In addition to help with ID, it contains expert tips, more than 1,400 photos and sounds for each species.
Q and A

“How can I tell a downy woodpecker and a hairy woodpecker apart when I don’t see them side-by-side?” The length of the bill is a key to identification. The downy is the smaller of the two birds and its bill is shorter than its head. The hairy’s bill is about as long its head. “What does a chickadee eat?” In winter, the natural diet of the black-capped chickadee is about half insect-related (insects and their eggs, larvae and pupae) and half seeds and berries. They add spiders to the menu. In summer, their diet becomes approximately 70 percent insect-related and 30 percent plant-related. Chickadees come readily to feeders, to chow down on sunflower seeds, safflower seeds, peanuts, and suet. 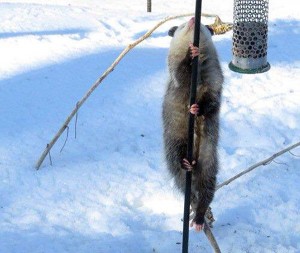 “How do I know if I’m seeing a crow or a raven?” If you’re in an area where both birds are seen, the raven can be identified by its much larger wingspan than that of the crow. The raven’s throat feathers have a shaggy appearance. Crows caw and ravens croak. Ravens have heavier bills. The tail of the raven is wedge-shaped. The crow has a more rounded, fan-shaped tail.

“Can opossums climb?” An opossum is well-adapted for climbing. Its feet are plantigrade, which means that it walks on the entire sole of the foot like humans and bears. An opossum’s toes are dexterous, skillful and deft, like our fingers. The hind foot has a toe that resembles a thumb and makes it look like a human hand.

In winter, the tips of starling feathers have white- or cream-colored flecks that wear away by spring.

The number of monarchs overwintering in Mexico has plunged to a new low, with only 1.65 acres of forest covered with clustering butterflies. At 20 million butterflies per acre, this year’s population is estimated at only 33 million monarchs compared to a peak of 1 billion in 1996.

Snowy owls have been hunting on the ice covering Lake Erie. It’s presumed they are preying upon sea ducks gathering in gaps of open water.

The Aetos Dios was a mythical, giant, golden eagle, which served as Zeus’ personal messenger and companion.

Mutual preening between two birds, the main purposes of which is to reduce instinctive aggression and strengthen pair bonding, is called allopreening.

The opossum has 50 teeth.

“Plenty of people miss their share of happiness not because they never found it, but because they didn’t stop to enjoy it.” –William Feather

“The earth has music for those who listen.” -–George Santayana