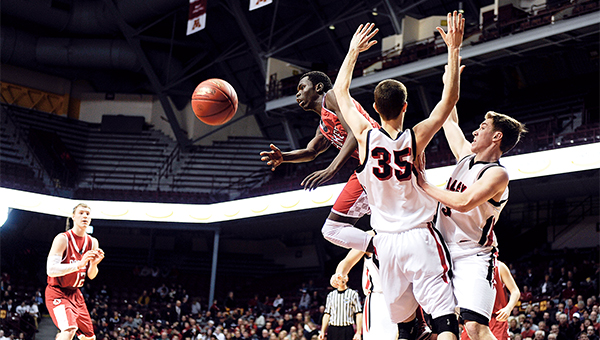 MINNEAPOLIS — Austin senior Bret Lukes was struggling with his jump shot and Alexandria was storming back into the game, but Lukes and the Packers didn’t flinch.

Lukes converted a 3-point play to put the Packers up 46-42 with 6:22 left in the game, and Austin hung on to beat Alexandria 61-50 Wednesday in the Class AAA state boys’ basketball quarterfinals in Williams Arena. 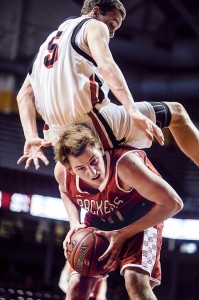 Lukes missed his first nine field goals before he came through with a big drive and score, and he went 8-for-9 on free throws to help Austin (27-3 overall) seal the win.

“When you miss shots and you’re a shooter, you feel like you’re not contributing to your team,” Lukes said. “My teammates did a lot of work, and luckily I was able to make a play to contribute to the win. (The last few minutes) were more exciting than nervous.”

Austin stormed out of the gates to open the second half as it rallied to a 37-21 lead with a quick 8-0 run, but the Cardinals (15-12 overall) would not go out that easily. Alexandria stepped up its defense as it rallied all the way back to within 41-40 with nine minutes left in the game.

Austin took a 43-40 lead when Curtis Oberbroeckling scored on a put-back with 8:34 left. The Cardinals pulled back to within 43-42 before Lukes made his big finish.

“In the second half we came out on fire, but Alexandria is good, and they came back. Our guys showed some resiliency, and I thought Bret made the play of the game with that drive,” Austin head coach Kris Fadness said. “We’ve got good players. They’ve been here before. The pressure was last year. This year has been a joy.”

Ajuda Nywesh, who scored 15 points while going 3-for-6 on 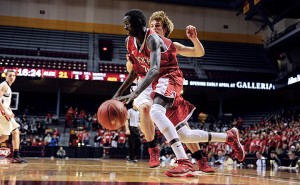 3-pointers, pulled down a big offensive rebound and he scored to put Austin up 48-42 and Lukes added another free throw to make it 49-42, but the Cardinals made one last run. Alexandria’s David Krivanek scored to make it 49-44, but John Voegeler missed a layup with 3:02 left in the game. Noah Brehmer hustled back and grabbed the rebound off of Voegeler’s miss, and he knocked down four straight free throws in a close game to put Austin back up 53-46 with 2:30 left.

Brehmer hadn’t played in Williams Arena before Wednesday, but he didn’t show any signs of nerves when he made the big free throws.

racking,” Brehmer said. “But you have to be ready to play like any other game. It’s still basketball.”

Early on it looked like that the Packers were going to blow out Alexandria as Zach Wessels, who finished with 23 points, was having his way in the post. The Packers led 13-8 half-way through the first half, but they missed a few open looks, and they finished the game just 3-for-16 on 3-pointers.

Austin’s defense helped keep it in control in the win as it held the Cardinals to 31 percent shooting and 11 turnovers.

“I thought we had some opportunities early, but we just didn’t capitalize,” Fadness said.

Austin may not have had its best shooting game on Wednesday, but they won — which is all that matters in March.

The Packers and Holy Family have just one common opponent in Rochester John Marshall. The Packers swept the Rockets by scores of 62-60 and 58-55. The Fire beat Rockets 75-54 Dec. 12.

“It’s going to be a battle,” Fadness said. “We’re going to play our zone press and hopefully we shoot it a little better.”