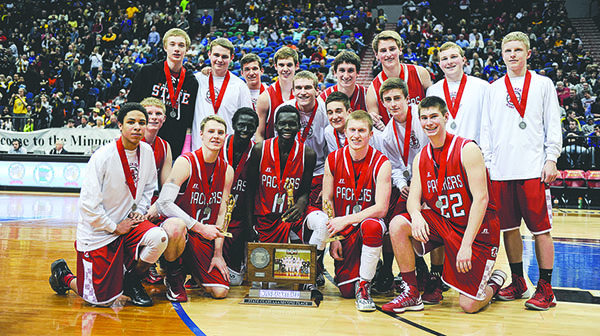 For the second straight year, Austin had its season end in a 60-40 loss to DeLaSalle in the Class AAA state boys basketball title game.

Austin senior Ajuda Nywesh poured in a game-high 24 points for the Packers (28-4 overall), but it wasn’t enough. The Islanders simply had too much size and too much quickness on the defensive end as they kept Austin out of the paint for most of the night.

The Packers shot just 30 percent from the field in the loss.

“They’re the best defense we’ve faced,” Austin senior point guard Zach Wessels said. “Their guys are all Division I players and they made plays like they always do.”

The Packers pulled to within 33-22 when Wessels scored on a post-up to start the second half, but the Islanders had a big answer as they responded with a 16-4 run over the next eight minutes to take over, and Austin never got closer than 15 the rest of the way.

Austin had to finish the game on tired legs as Wessels and Nywesh played the entire game without a rest.

“We logged our guys a lot of minutes tonight,” Austin head coach Kris Fadness said. “We rode our horses and it wasn’t quite enough. There’s no shame in losing to DeLaSalle. They’re a better team this year than they were last year.”

Austin tied the game at 14-14 in the first half when Gach Gach hit a 3-pointer, but the Packers offense struggled from that point. DeLaSalle closed the half on an 11-3 run.

With the win, DeLaSalle became the seventh team in Minnesota history to win three state titles in a row. 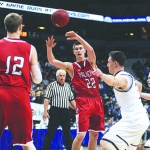 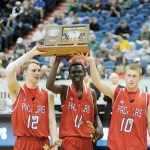 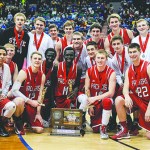 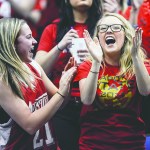 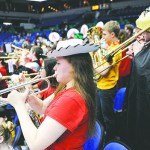 Austin band member Katie Maxa plays during a combination performance of the Austin and DeLaSalle bands Saturday night before the start of the game. – Eric Johnson/Albert Lea Tribune 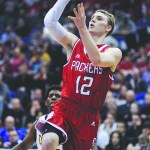