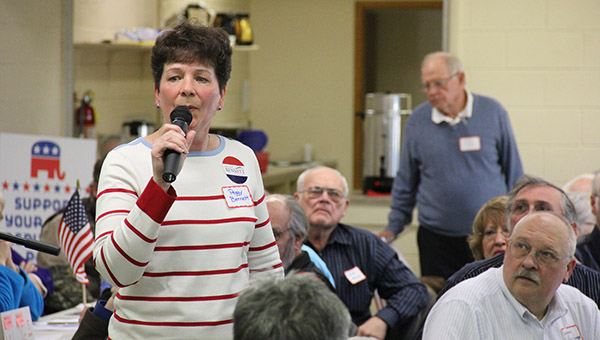 GENEVA — Albert Lea schoolteacher Peggy Bennett will be the Republican challenger to face incumbent DFLer Shannon Savick in the race for House District 27A.

On the second ballot at the District 27A Republican convention Saturday at the Geneva Community Center, Bennett garnered more votes than Albert Lea business owner Milan Hart. The tally was 65 to 20. The first ballot was scrapped following a problem with ballot dissemination to delegates.

“I am excited. I am honored. I am energized and ready to go,” Bennett said.

The two candidates were visibly nervous before the vote and judging the room it seemed difficult to tell which candidate would win.

“It was a little nerve-wracking knowing so much was on the line, but also it was in a group of people who are friends, so that’s always a good feeling, too,” she said. 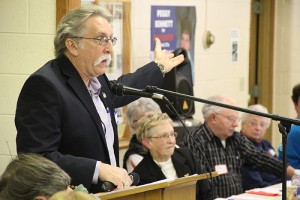 Milan Hart, an Albert Lea business owner, speaks to the 130 in attendance Saturday at the Geneva Community Center for the District 27A Republican Party convention. — Tim Engstrom/Albert Lea Tribune

Hart congratulated Bennett and said he will ask his supporters to support her.

Bennett said having both run helped boost the Republican interest in District 27A. She said it was “like iron sharpening iron.”

Bennett, a first-grade teacher at Sibley Elementary School, had time to speak to the crowd of 130 people. She said she likes to study history and has six grandfathers who fought for liberty in the Revolutionary War.

“I want to stand up and echo that voice for liberty,” she said.

Bennett read a paragraph from the Declaration of Independence, then said the country had strayed from its origins as a result of layers and layers of laws and bureaucracy. She cited the proposed multimillion-dollar Senate building, an anti-bullying people and tax increases in Minnesota as examples.

She said she is a single person but she is not a single-issue person. She said she cares about Second Amendment rights, opposes the anti-bullying bill and is concerned about people not paying attention to what the government is doing.

Bennett said she is opposed to the marijuana laws from the view of protecting children but could be in favor of them if presented with more information. She said she supports schools whether public or private as long as they have the children’s education as their best interest.

She said she would like a provision to require chambers of the state Legislature to vote on measures as a single issue, rather than many issues wrapped up in a single bill.

“It’s part of the government going on a diet, if you ask me,” Bennett said.

She said her best strength is as a listener.

“I am not one to listen to a community by seeing which way the wind blows,” Bennett said.

Bennett said she opposed the same-sex marriage legislation but doubts it could be undone now that it is law.

Hart, who owns a store that sells firearms and weapon supplies, also spoke. He said the government takes 47 cents of every dollar a small businessman makes. With the remaining 53 cents, he still must pay other taxes, such as fuel, license tabs, dining out and expenses of living.

He said it puzzles him why people would go into business in Minnesota.

“And Minnesota still wants more,” he said. “I’m so glad I don’t smoke and drink. Think of the taxes on that.”

He said he knows death and taxes are the only sure things in life, “but death should not be caused by taxes.”

He said unemployment benefits should end after three months. He said it is untrue that Americans don’t want to do jobs that illegal immigrants will take, noting he had dug ditches and shoveled manure for not much money but with dignity.

Hart railed against inventory counting as liquid income in Minnesota income taxes. He said it hurts the ability of small business leaders to expand their business. He said Albert Lea would grow if it weren’t for Minnesota’s high taxes.

Look for more reports on the convention in the Monday Tribune.

Republicans from the 1st Congressional District gather to nominate a candidate to oppose incumbent Tim Walz at 9:30 a.m. Saturday at Southwest Middle School in Albert Lea.