Carlie Wagner is a finalist for Miss Basketball state award 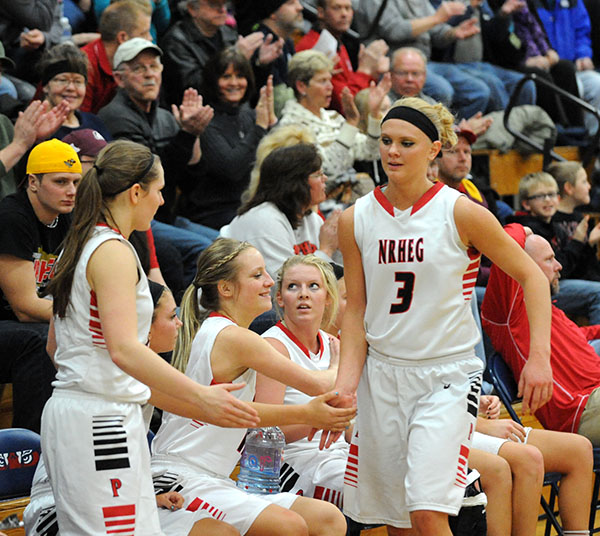 NRHEG’s Carlie Wagner is greated by her teammates after checking out of the game Jan. 30 against Albert Lea. – Drew Claussen/Albert Lea Tribune

NRHEG basketball standout Carlie Wagner is a finalist for Miss Minnesota Basketball, an award given to a player deemed the best in the state.

There are five finalists. The other four are Kenisha Bell of Bloomington Kennedy, Chase Coley of Minneapolis Washburn, Cayla McMorris of Park Center and Breanna Rasmussen of Fergus Falls.

The award is handed out by the Minnesota Girls Basketball Coaches Association. Last year’s winner was Rebekah Dahlman of Braham.

Wagner led the NRHEG Panthers to the Class 2A title in 2013, and her team is viewed as likely to win it again this year. She holds the state scoring title this season, with 930. Win or lose, the end of the Carlie Wagner era playing at New Richland comes at the end of the week.

The senior is slated to attend the University of Minnesota and play basketball for the Golden Gophers.

Coley, a center heading to the University of Iowa, won the Gatorade Minnesota Girls Basketball Player of the Year title last week. She led the state this season in rebounding and has racked up 668 points.