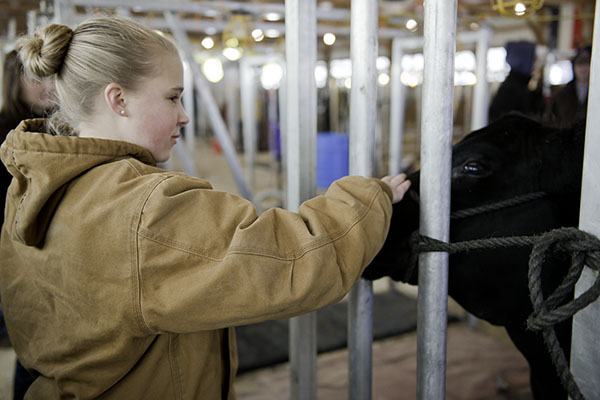 March Madness was certainly in the air on Saturday, in more ways than one.

The Freeborn County Fairgrounds hosted the annual March Madness cattle preview show on Saturday, with about 120 animals registered to show.

Eric Neel, one of the event coordinators, said the show has been going on for at least 10 years and is open to anyone in the country. This year saw entries from not just Minnesota, but from the Dakotas, Iowa and other parts of the Midwest.

For Tara and Emily Thorson of Glenville, the show has been a tradition in their family since Tara, now 18, was a young child. This year was no different. Tara entered her steer, Iron Man, into the show, while Emily entered her heifer, Savannah. 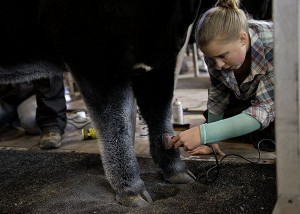 Emily Thorson readies her cow, Savannah, for show Saturday. It’s routine at cattle shows to paint parts of the cow, such as the legs and underside of the stomach, white to make them appear thicker. – Colleen Harrison/Albert Lea Tribune

Twelve-year-old Emily spent Saturday morning getting Savannah ready, from cleaning her up to painting and trimming her. Savannah tolerated the preparations fairly well, letting out an occasional moo from time to time.

March Madness was the sisters’ fourth show this year. Tara said they tend to enter at least one show a month throughout the season, which, for them, typically runs from January to August.

“Getting to see everyone and show, everything about it is fun,” said Tara.

Their mother, Adrian, said the cattle shows are a huge part of the girls’ lives.

“These are on at our house every day, from January through summer. They don’t stop watching,” she said.

Neel said the show is generally a precursor for those preparing to sell their livestock, whether it’s for market or breeding purposes. In Emily’s case, it’s not. 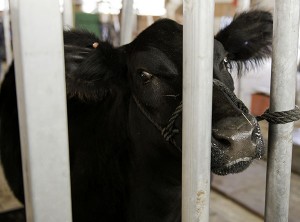 Adrian said Emily has two more cows at home and gets attached to them pretty quickly.

As Emily got Savannah ready for her showing, she stopped every so often to give Savannah a quick pat on the head before going back to the task at hand. Throughout all the flurry of activity, the attachment was easy to see.