The site has been selected, the floor plan is drawn and now the society needs help raising funds for the project, according to a news release. 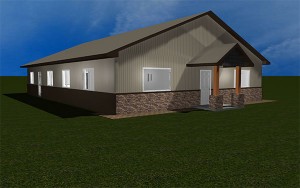 A pancake supper will be from 4:30 to 7 p.m. Tuesday at the First Baptist Church to raise funds for the museum. Boy Scout Troop No. 219 from Clarks Grove has volunteered their help. Copies of “A History in Story and Pictures of the Clarks Grove Area” by the Heritage Society will also be available for purchase.

The release stated leaders of the Heritage Society believe they will need $80,000 to put up the building. Donations are tax-deductible.

They hope to have a groundbreaking this spring. The museum will give historical items and family heirlooms, some of which have already been donated and collected, a space to be safely displayed.

Letters have also been sent out about the project to all the households in Clarks Grove and rural Ellendale.

The release stated Clarks Grove is one of the the older towns in the area and was home to Danish settlers who were active in starting co-operative businesses — the first in the state.

Many of the people who live in Clarks Grove would like to preserve some of the history and artifacts. There are still a number of items of yesteryear, treasured by the families who inherited them.

With this thought in mind, Phyllis Hanson and Kathy Jensen started a heritage society in Clarks Grove in 1994 with 46 charter members. Following those first few years of meeting it was decided to incorporate in 1997. They had guest speakers come in to share a program as well as provided demonstrations about things in the past.

Hanson and Jensen organized trips, and many people had great times remembering when Clarks Grove was first established. Frequently, the Clarks Grove Area Heritage Society members were asked if there wasn’t a possibility of building a museum to commemorate the years and service of the early settlers and the progress that had been made extending to the present residents who call Clarks Grove home.

The recent 150th anniversary of the First Baptist Church produced more information and was widely accepted — not only by the present residents and descendants of former residents, but by the community in general because so many of the activities they recalled coincided with the years and times of others. And of course the events, equipment and foods were so similar readers wanted to remember and leave evidence for their descendants to cherish.

People who would like to donate to the cause but are unable to attend the pancake supper should mail  donations to Clarks Grove Area Heritage Society, Kathy Jensen at P.O. Box 188, Clarks Grove, MN 56016.