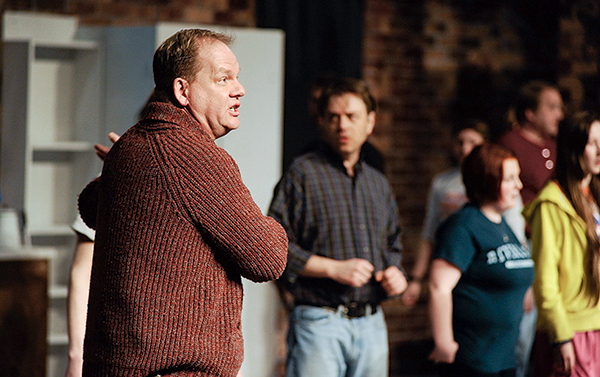 James Douglas plays the Man in the Chair in the upcoming presentation of the “The Drowsy Chaperone”. –Eric Johnson/Albert Lea Tribune

First thing to know about the upcoming Riverland presentation of “The Drowsy Chaperone,” is it’s really not the play you’re coming to see.

It’s a play within the play, but it’s part of the play’s charm as “The Drowsy Chaperone” actually revolves a character simply known as The Man in the Chair who will take the audience on a ride through the 1920s era-style of musical comedy featuring a fictional play, “The Drowsy Chaperone.”

If you’ve never heard of “The Drowsy Chaperone,” you might not be alone.

“A lot of people haven’t,” director Lindsey Duoos Williams said. “I saw the show for the first time in Los Angeles and just fell in love with it. It’s one of the funniest things I’ve seen in theater.”

The gist of the show revolves around The Man in the Chair, played by James Douglass and takes place in his apartment. He begins talking with the audience about his favorite musicals before putting on a record of his most favorite musical, “The Drowsy Chaperone.” As the record plays the play begins to take shape in his living room as he narrates what is happening with actors and even critiques the show.

In essence it’s a play within a play.

“It’s a very frothy, 1920’s comedy, a very silly and broad comedy,” Duoos Williams said. “On one level, it’s a silly comedy and on the other level it’s kind of a love letter to musical theater.”

The play opens as a one-man show on the surface, to a broad spectacle like the comedies from an era that was just emerging from the over-the-top  singing, dancing and shenanigans of vaudeville.

But it doesn’t come without it’s share of challenges, either. 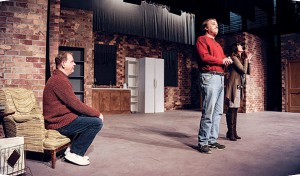 James Douglas, along with Lia Culbert and James Zschunke, rehearse a scene from the upcoming Riverland production of “The Drowsy Chaperone.” –Eric Johnson/Albert Lea Tribune

“One of the biggest challenges is making those two worlds very distinct,” Duoos Williams said. “The man is really kind of mundane. You don’t know a lot about him, but you learn a little as the show goes on. The other is a rich fantasy world of the 1920s. It’s been a challenge, but it’s been fun.”

Another tricky situation is the awareness of the actors in the 1920s play and the Man in the Chair in that there is not supposed to be any awareness.

“They’ve had a hard time pretending that they are not there,” Duoos Williams said of the actors. “As an actor you want to look at (the Man in the Chair), and I have to keep reminding them, ‘you can’t look at him. He’s not there.’”

“The Drowsy Chaperone” is another in a series of plays this season that have showcased a variety of skills and what the RCC casts are capable of.

The third play of the season, this show stands separate from the two previous plays “Boeing, Boeing,” and “The Rocky Horror Show. ”It’s a balancing act of keeping both the public and players interested.

It’s particularly evident in this show.

“It’s a really great mix for this show,” Duoos Williams said. “We have students that are just phenomenal and along side them we have a lot of heavy hitters from the community. It’s a really, really strong cast.”

As for the play itself, while appearing on the surface as a complicated balance between elements, it is simple as well.

“This is written for people who like musicals,” Duoos Williams said. “If they’ve left feeling better than they did when they walked in, then it makes us feel better.

The play began last week and continues today, Friday and Saturday, with a 2 p.m. matinee on Sunday, March 5, at Frank W. Bridges Theatre. Tickets are $16 and are available through www.riverland.edu/tickets. Tickets may also be purchased at the Riverland Box Office located in room E107 in the East Building of the Austin campus. Box Office hours are Monday through Friday, 11 a.m. to 1 p.m. and one hour before performances.