Memorial services for Ellen L. Johnson, of Albert Lea, will be at 2 p.m. Thursday at Our Savior’s Lutheran Church in Albert Lea. The Rev. James Kassera will officiate. Interment will be at a later date in Hillcrest Cemetery. Friends may visit with family one hour before services at the church. 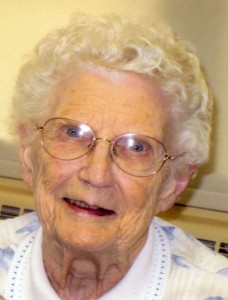 She attended rural country school near Albert Lea. Ellen had worked at Land O Lakes and then at Halverson School in Albert Lea as a lunch monitor.

She married Edwin Nyman; eight children were born of this union. They were later divorced. She later married Dale E. Johnson.

Ellen enjoyed gardening, canning, playing bingo and collecting, especially antiques.  She had a great love for her children and  her entire family.