Emergency management prepares for the worst 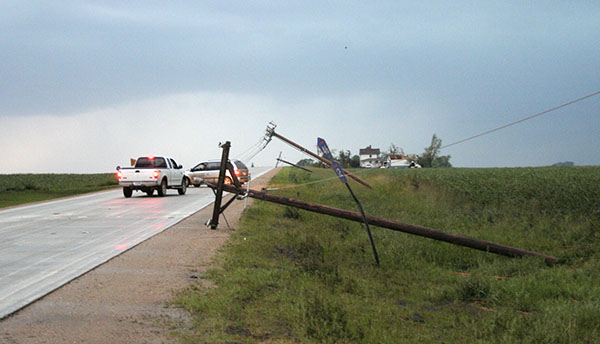 When tornadoes struck Freeborn County in 2010, residents saw landscapes changed, homes destroyed and even one death.

Though they hope to never see a disaster of that scale again,  leaders with the Freeborn County Sheriff’s Office, Freeborn County Public Health and other agencies are preparing for the worst. 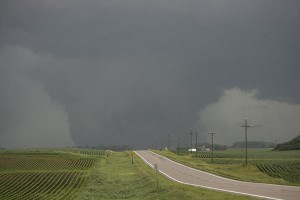 An EF4 tornado west of Albert Lea on June 17, 2010, heads in a general northeasterly direction. However, at times it headed more east and at others more north. – Arian Schuessler/Mason City Globe-Gazette

Freeborn County Emergency Management Director Rich Hall said the county hired a firm in 2012 and 2013 to look at the county’s three worst-case emergency scenarios. Then the Sheriff’s Office, along with other key stakeholders such as the Albert Lea Police Department, began looking at response, capabilities and which resources might be brought in from outside of the community if the worst happens.

“What are our needs going to be?” Hall asked. “What can we handle internally or what do we need help with?”

A direct hit by a tornado on Albert Lea, a city of 18,000, is among the worse-case scenarios they looked at. It could cause untold damage, leave 100 dead and 8,000 displaced.

Though the tornadoes in 2010 affected a lot of people, they did not strike densely populated areas. The only town struck was Armstrong, a small, unincorporated place four miles west of Albert Lea. There were fears that humid June evening of a hit on Albert Lea. Police officers and sheriff’s deputies monitored the tornadoes, and many thought the EF4 or possibly the offshoot that struck Armstrong would continue east toward the population center of Freeborn County. However, the EF4 turned north across Interstate 90, and the Armstrong twister died out.

No storm has passed through Freeborn County with such severity since. Knock on wood.

The emergency management group is looking at everything that would be needed if Albert Lea were hit, from law enforcement response to transportation needs to debris management and a need for portable toilets.

They have talked about having food, water and shelter for not only people but pets and livestock as well.

Derailment is another worst-case scenario. With multiple railroad lines in the area, they looked at what to do if a train derails, leaving multiple people dead and others displaced.

Lastly, the group looked at what the response should be if there is a school shooting.

“We’ve had community meetings with all the people who are players who will need to be helping us with what has to be done,” Hall said.

Chief Deputy Glen Strom said it has been important to bring multiple community organizations into the planning because the Sheriff’s Office cannot handle these disasters on its own.

“It’s a continuous improvement process,” Hall said. “We’re training the right people out there to respond and we’re working on our partnership with the state and federal government. The time to get to know somebody isn’t during the emergency.”

So what would they do differently if the tornadoes were to happen again?

Freeborn County Sheriff Bob Kindler said the group has looked at how to operate incident command centers and stage resources, along with how to handle loose livestock. They have developed a better method for search and rescue to avoid duplication and are trying to develop crucial relationships with the news media.

Hall said communication among law enforcement, medical personnel and firefighters has improved with the implementation of the Allied Radio Matrix for Emergency Response system — called ARMER for short.

Many are being trained in the National Incident Management System, which identifies how to manage emergencies regardless of their cause, size, location or complexity.

“We need to make sure everybody’s on the same sheet so we’re all going in the same direction,” Hall said.