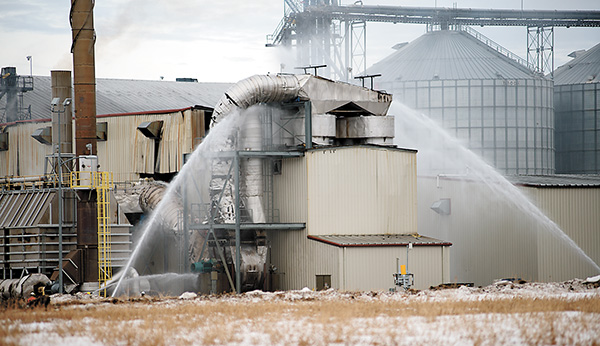 FERGUS FALLS — No one was injured after an explosion Monday afternoon in the dryer building area of the Green Plains Renewable Energy-owned ethanol plant in Fergus Falls. The initial report was for a fire, and the explosion happened after fire crews arrived on the scene, according to Fergus Falls Fire Chief Mark Hovland.

“We’re very fortunate that we were not inside the building at the time,” Hovland said.

The original call came in at 4:20 p.m. at the ethanol plant, at 24096 170th Avenue on the west side of Fergus Falls. General Manager Anthony Hicks had just left when it happened, he said, and then he came right back.

“We went into emergency shutdown,” Hicks said. “Nobody was in that particular section of the plant.”

Only the minimal number of employees, seven, were in the plant at the time, according to Hicks. The peak operating hours of the plant are from 8 a.m. to 4 p.m.

Hicks didn’t know the extent of the damage Monday evening, except to say that there was “significant damage in the dryer building.”

Law enforcement shut down County Road 116 as crews were on the scene. Tankers made their way in and out of the plant area to bring more water to the scene.

At about 8 p.m., crews were still working on putting out hot spots. Liquid ethanol was not involved in the fire, Hovland said.

They will need to investigate to determine the cause of the fire, he said.

The Fergus Falls plant, which opened in 2008, is one of two that Omaha-based Green Plains Renewable Energy has in Minnesota.