Hopping hobby: Worth Brewing Co. has been owned by Northwood couple for seven years 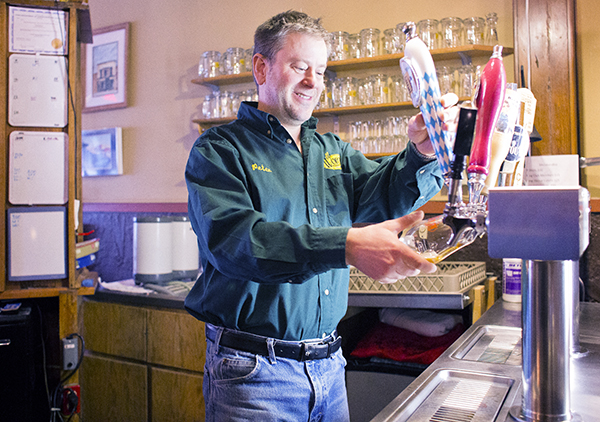 Peter Ausenhus, co-owner of Worth Brewing Company in Northwood, pulls a beer in his taproom. Ausenhus and his wife have owned and operated the brewery for seven years. – Colleen Harrison/Albert Lea Tribune

NORTHWOOD — After one visit to Worth Brewing Co., it’s hard to believe that brewing was ever just a hobby for co-owner Peter Ausenhus.

Ausenhus and his wife, Margaret Bishop, have owned the brewery since its inception seven years ago. Ausenhus has been a home brewer since 1987 and has been brewing beer professionally since 1994. After brewing for Summit Brewing Co. in St. Paul and then moving to the Northwood area, Ausenhus was approached by a local bar to be hired as a brewer. When plans fell through and the bar eventually closed, Ausenhus and Bishop decided to start their own brewery.

The couple have an interest in historical preservation, and when they heard that the former Alliant Energy building in downtown Northwood would be coming available, they knew they had their location. The building has been in existence since 1886, and had an addition in 1935. When Ausenhus and Bishop bought the building in 2006, they restored it to its 1930s look and feel and made it their own.

The brewery is open from 5 to 9 p.m. Wednesdays and Thursdays, 5 to 11 p.m. Fridays and noon to 11 p.m. Saturdays. Most other days Ausenhus is brewing onsite while Bishop runs her energy-efficiency consulting business out of the office upstairs.

“I like the independence, and setting my own schedule. … I get to brew what I want,” Ausenhus said. “There’s a different beer for every season.”

Ausenhus said the best sellers are usually the Brown Ale and the monthly specials, which sometimes turn into year-round mainstays. His favorites tend to be German-style Bock beers.

The brewery is a member of the Iowa Brewers Guild and partakes in seasonal festivals. Two festivals that they routinely appear in are the Festival of Iowa Beer around Labor Day in the Amana Colonies and the Iowa Craft Brew Festival in Des Moines in June. Ausenhus says they tend to stay more local since they only distribute onsite, at least for the time being. In the future Ausenhus hopes to distribute locally and regionally in northern Iowa and southern Minnesota.

The brewery has a core clientele of local supporters, and Ausenhus said it also gets a good number of customers from the Albert Lea area. Worth Brewing maintains a 100-mug mug club, which currently has a waiting list.

The brewery, at 826 Central Ave. in Northwood, will host Spring Bock Fest on April 19. The festival will be the brewery’s way of putting the spring season on tap, with music, food and the opening of the biergarten to accompany the beer.

Worth Brewing Co. is community-driven, and helps nonprofits with its “Real Ale Relief” program. About every couple months, the brewery donates all proceeds from one cask of real ale to a local nonprofit. Real ale, or cask-conditioned ale, is traditional English beer without any artificial carbonation that’s served directly by gravity. Nonprofits within Worth County and surrounding counties can apply for the relief program by going to the brewery’s website at www.worthbrewing.com. Past recipients of the program have been local humane societies and fire departments, among others.

“We’ve had lots of help ourselves and are really thankful for that. We like to give back when we can,”  Ausenhus said.