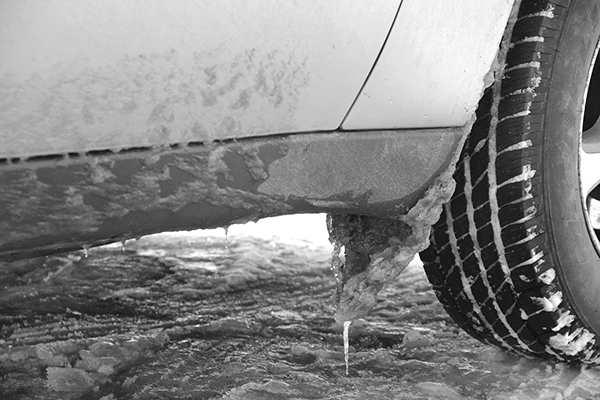 A chunk of ice sticks to a car parked on West Front Street on Saturday morning. The chunks of slush and ice usually don’t have to be removed, according to an auto instructor. — Tiffany Krupke/Albert Lea Tribune

MANKATO — Whether you call them slush puppies, shlumps or fender boogers, if you’ve been driving on southern Minnesota roads in recent weeks, you’ve probably grown a few.

Those hard-as-granite frozen chunks of slush that coat wheel wells and hang from fenders have been reaching impressive size as salt-infused snow and ice on roads combine with frigid temperatures. In some cases, they expand to the point they nearly reach the road surface, curving gracefully around the tire, leaving just a fraction of an inch of space between the built-up ice and the tread.

Question is, does the icy buildup require any action? Does it cause problems if it gets too extreme?

“It does,” said Mike Skrove of Skrove Automotive in St. Peter.

People have dropped off vehicles complaining of a vibration at certain speeds on the highway or a shuttering in their steering wheels.

“It actually freezes to the inside of the wheel and it builds up on the inside to the point that it gets out of balance,” Skrove said of the frozen slush. “… It also can damage the seals on the transmission where the drive shaft goes in.”

But that’s ice that requires some effort to see. The stuff that’s hanging on the outside of the fender or from the bottom of the wheel well probably isn’t something that needs to be dealt with, said Jim Brady, an instructor in the automotive program at South Central College in North Mankato.

“Overall, it can be ignored,” Brady said. “If it becomes too big of an ice chunk, it can interfere with the wheel.”

Even then, Brady said a modern tire tread is going to be tougher than even the hardest piece of ice.

“I don’t think there’d be much of an issue of damaging a tire,” he said.

The bigger danger of damage might be from hitting a large chunk that another vehicle has shed in the middle of the road, which could tear off an already loose piece of the exhaust system, Skrove said.

For those who just dislike the look of the chunks or don’t want them dropping off and leaving a mess in the garage, Skrove recommends a trip to the car wash. Even during this extremely cold winter, car washes aren’t out of the question as long as drivers take the time to wipe down the doors and door latches, maybe spraying a bit of lubricant on the latches, after the wash.

A good wash or two after the winter finally ends is probably the most important step in preventing damage from the salty ice and slush plaguing vehicles, Brady said. Even after the chunks melt, they leave behind rust-promoting crud.

So what about the most common approach to removing fender tumors — a well-aimed kick, typically in some public parking lot, that can leave a remarkably large ice sculpture on the pavement? Brady and Skrove say it’s probably OK if you don’t get carried away.

The paint finish isn’t likely to be damaged, but plastic parts are not uncommon on today’s cars and can be cracked if you go after the ice chunk like an NFL punter.

As for what those chunks should be called, Skrove hears “snow boogers” most often from his customers.

“We have other names in the shop,” he said, “but I better not tell them.”