“It’s an awesome opportunity for us,” said Iowa State coach Fred Hoiberg on the Cyclones receiving the third seed. “We’re very excited to have the opportunity to compete at a national level again.”

Iowa State enters this tournament on a roll. 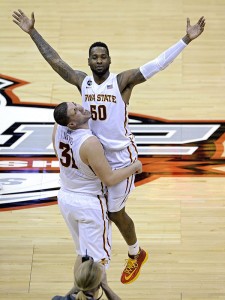 Iowa State Cyclones guard DeAndre Kane (50) is hoisted into the air by forward Georges Niang (31) after the team’s 74-65 win Saturday over the Baylor Bears in the Big 12 Basketball Tournament championship game at the Sprint Center in Kansas City, Mo. – John Sleezer/Kansas City Star/MCT

The Cyclones (26-7) beat Kansas State, Kansas and Baylor to win their first Big 12 tournament title since 2000.

“I think our schedule has definitely helped for what’s upcoming, not only our nonconference but just what we’ve gone through here in these last couple weeks,” Hoiberg said. “The goal is to play your best basketball at this time of year and hopefully we build off what we did in the tournament here last week and go out and play well.”

North Carolina Central, the No. 14 seed, is on a 20-game winning streak and has captured the Mid-Eastern Athletic Conference regular-season and tournament titles. The Eagles (28-5) won their first league tournament title since 1950. Their history-making season also included an 82-72 overtime victory over NCAA tournament participant North Carolina State.

The Eagles are led by Jeremy Ingram, who averaged 20.6 points per game this season, and Jordan Parks, who averaged 10.6. Point guard Emanuel Chapman dished out 6.5 assists per game.

“You obviously don’t know a lot about the team,” Hoiberg said on Sunday. “We’ve made some initial calls to some teams that have played against them. It sounds like a very good team, like all teams are that are playing at this time of year.”

Game time is set for Friday night following the North Carolina vs. Providence game, which tips at 6:20 p.m., and will be televised on TNT.

Virginia (28-6) earned the top seed in the East Region. The Cavaliers beat Duke 72-63 on Sunday to win the ACC tournament.