Joyce (Brigger) Dombroske passed away at the New Richland Care Center, her home for the last seven years, on March 2, 2014. 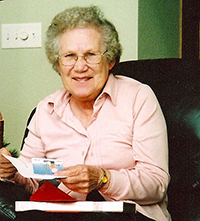 Joyce and Bob first lived in Wells, and then moved to Albert Lea in 1955, where they were members of the Moose Lodge and camping club for many years. They settled in New Richland in 1973, where Joyce worked in the meat department at Abraham’s grocery store for several years. She enjoyed puzzles, playing cards, camping, fishing and especially spending time with her husband of 63 years.

The funeral will take place at 2 p.m. on Monday at Trinity Lutheran Church in New Richland, with a viewing one hour before the funeral.