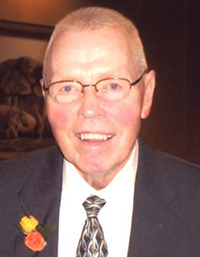 Funeral services will be at 11 a.m. Wednesday at Faith Baptist Church. The Rev. Dennis Seiler will officiate. Visitation will be from 5 to 8 p.m. Tuesday at Bonnerup Funeral Chapel in Albert Lea and one hour prior to the service at the church. Burial will be at Sunset Rest Cemetery in Northwood.

Leonard was born Dec. 13, 1932, in Clear Lake, Iowa, to Milton and Hazel (Peterson) Frazier.  He accepted Jesus Christ as his savior at the age of 18.

Leonard attended country schools and graduated from Rock Falls High School. He joined the Navy in 1952 and was a Yeoman Third Class and Communication Navigator during the Korean War.

Leonard was united in marriage to Marian Brown June 18, 1955, in Mason City. They moved to rural Northwood where they farmed until 1970. Leonard worked at Freeborn Foods for six years. He was a heavy equipment operator at Freeborn-Mower Electric Cooperative and retired after 23 years. While there, he was awarded the Most Positive Employee Award.

Leonard loved to serve in many various ministries of Faith Baptist Church where he was a faithful member. He enjoyed teaching Sunday school, being a song leader and soloist, deacon, groundskeeper and doing outreach work. He loved people and loved to share the gospel of Jesus Christ. Leonard was a great encouragement to all the lives he touched and lived to the glory of the Lord.

Leonard spent his last five years at Hidden Creek where he enjoyed many friendships. He enjoyed storytelling, walking, golfing and spending special times with his children, grandchildren and great-grandchildren. His faith in God set an example to all who knew him. Leonard was a devoted and loving husband, father, grandfather and friend; he will be deeply missed.

He was preceded in death by his loving wife of 47 years, his parents, an infant brother, and several sisters-in-law and brothers-in-law.