Funeral services for Marvin E. Christensen, 97, of Albert Lea will be at 3:00 p.m. Friday, at Bayview/Freeborn Funeral Home. The Rev. Kent Otterman will officiate. Interment will be at Freeborn Cemetery this spring. Visitation will be one hour prior to the service at the funeral home.  Online condolences are welcome at www.bayviewfuneral.com. 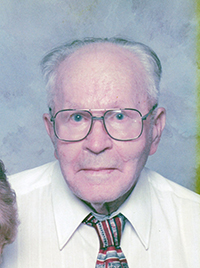 Marvin Edwin Christensen died March 3, 2014, at the Good Samaritan Society in Albert Lea. He had been living near the same location at the Bancroft Creek Estates prior to his death.

On Aug. 7, 1940, he married Tracy Eleanor Buchanan in Bath. The day after the wedding, the newlyweds started on a trip to the west coast. They drove Marvin’s Model A Ford and stayed in motels along the way. The whole trip cost $100.00 for gas and motels. They visited most of the western states including Mexico, saw relatives and many scenic places.

Marvin was a dairyman and farmer, at first farming on the family farm in Bath with horses. He also owned a threshing machine. His first tractor was a Twin City, but he soon became fond of John Deere Tractors. He later farmed in Hartland, and eventually in Freeborn, where he and his wife Tracy became the owners of the Snyder-Buchanan Century Farm. He was a kind and compassionate man, quiet and unassuming, never hesitating to help his neighbors and had many friends. He was a lifetime resident of Freeborn County and continued his farming operation until age 78.

Marvin and Tracy had five children; Dennis, Loren, Lowell, Lynette and Joyce. Through the years they opened their home to several children including Maxine Vanderploeg and several foster children.

Marvin was a member of the Albert Lea Seventh-day Adventist Church. He will be deeply missed by his family and friends.

Also preceding him in death were his parents and his brothers Raymond and LeRoy and his sister Ada.

In lieu of flowers memorials are preferred to Good Samaritan society or Hospice at Mayo Clinic Health Systems in Albert Lea.