Next edition of our magazine hits streets

This incredible issue dives into things never done before for Albert Lea magazine. For example, you are going to find out about some great places to hang out with your kids and get some ideas on making your home a kid-friendly zone.

This issue also covers the usual suspects: beauty tips, local finds from staff members, inspiring stories and gardening tips from a local expert. The “Seen” section is where you’ll see most of your friends. We took shots at the Bridal Expo, the Gourmet Food Auction, a varsity boys’ hockey game and the best photos from recent weddings and engagement submissions.

Above all, you will enjoy that Albert Lea magazine is completely about Albert Lea. The model featured on the cover is Emily Troe. You might have seen her in an Albert Lea Community Theatre production. You might have been friends with her in high school. You might know her parents. That’s the cool part. There is a very good chance of knowing many of the people you find in this magazine.

Troe, by the way, was outstanding in her ability to model for the camera. She seemed to have a knack for it. 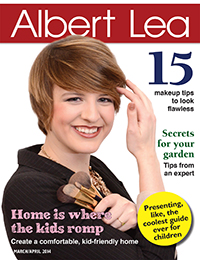 The Albert Lea Tribune staff has been working on perfecting what Albert Leans want in a magazine in general for more than seven years. We’re always evolving, but we are pretty proud of where we are today. It’s far different than where we started in 2006.

The last issue of Southern Minnesota magazine was published in the winter of 2012. Starting in the spring of 2013 Albert Lea magazine and Austin Living had separate issues. Having the ability to focus only on the great people of Albert Lea is just what our audience wanted.

Albert Lea magazine is now published every other month. Many community members have a feel of ownership of Albert Lea magazine and we hope you will to. If you don’t find a copy around town, stop down to the Albert Lea Tribune to pick up a free one. It’s worth bearing the cold.