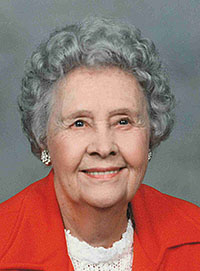 Olga Kral was born on Dec. 21, 1910, to Olaf and Eline (Severson) Olson in Haugesund, Norway. In 1914, at the age of 4, Olga’s family immigrated to Iowa. She attended school in Northwood. On Sept. 17, 1932, Olga was united in marriage to Charles Kral in Glenville. Together they farmed east of Glenville retiring in 1980. After retiring the couple moved to Albert Lea. She was a member at First Lutheran Church in Glenville. Olga enjoyed gardening, baking and making homemade doughnuts.