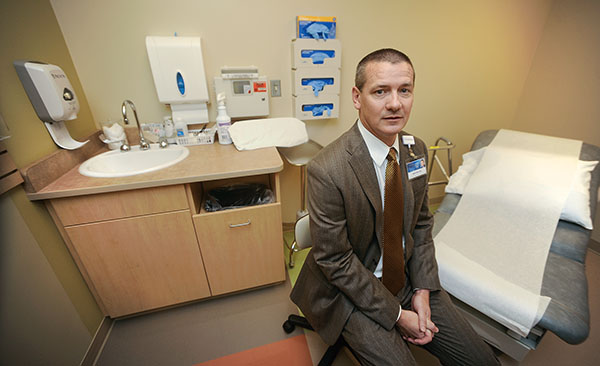 Mayo Health Systems in Austin and Albert Lea CEO Dr. Mark Cito sits in an examination room of the newest hospital expansion. Ciota has been in the mix as changes and improvements sweep over the hospital and looks forward to what may be coming down the stretch. – Eric Johnson/Albert Lea Tribune

Dr. Mark Ciota loves NASCAR, but he has never been to a race. He attended an Indianapolis 500 race once, but after working 90 to 100 hours a week, he has little time to watch the sport on TV, let alone take a cross-country trip to an auto-racing event.

But as the CEO of Mayo Clinic Health System of Albert Lea and Austin, and as an orthopedic surgeon in Albert Lea, he is perfectly fine with that. He’s too busy guiding the local medical center through one of the most transformative periods in the country’s recent medical history.

Ciota started with the Mayo Clinic Health System in 1995 as an orthopedic surgeon in Albert Lea. He became that hospital’s medical director in 2001, and was promoted to chief executive officer in 2004, all the while working as a surgeon. Then, in March 2012, he was named CEO of both Austin and Albert Lea locations, 10 months ahead of those hospitals’ merger.

Now, working 12 to 14 hours a day, six days a week — plus being on call every other night — he’s focused on implementing a team-based approach to health care as the Affordable Care Act, also called Obamacare, takes effect. Add to that the merger of the Austin and Albert Lea hospitals, Austin’s $28-million expansion and Mayo Clinic Health System’s furthered partnership with Mayo Clinic in Rochester, and his slate is full.

“But I still enjoy it so much that I think the hours are worth it,” he added.

Since the Austin and Albert Lea locations have transitioned from an affiliation with Mayo Clinic to a full partnership, doctors have reaped the benefits of a larger knowledge base, access to patient medical records throughout the system, and the elimination of redundancies like repeated blood work or X-rays, as all locations use the same equipment.

One of the larger issues during the change, however, is patients’ access — or wait time — to see a doctor. While the medical center has hired more physicians and is improving wait time, it’s still not where it needs to be, Ciota said. He attributes that to a national shortage of family practitioners.

“We need the community to understand what our issues are, and what we’re doing to improve them,” Ciota said. “Part of that is the communication to the community.”

Ciota is optimistic about another change — the switch from pay-per-use care to the team-based approach. With the old system, there weren’t many incentives for doctors to focus on preventative care or keeping patients out of the doctor’s office, he said. Now, the more patients a team can care for, the more they will be compensated.

So if a physician team has more of its diabetic patients under control and out of the hospital, for example, it can handle a larger patient load.

With the team approach, patients’ face time with doctors should also be reduced, Ciota said. If a patient needs a fourth or fifth refill of a prescription, they may just talk to a pharmacist, or communicate electronically. Or a nurse could handle other routine services.

“You may see a physician if you need to, but it may not always be the same one,” Ciota said. “And I think Americans are going to struggle with that.”

No one can be certain all the ways the Affordable Care Act will affect the health system, Ciota said. But the whole idea, he said, is to keep people healthy.

“And health care has never done that in the past,” he said.

For now, the constant changes will keep Ciota plenty busy. But in the off chance he finds time on his hands someday, maybe he could end up at a NASCAR race watching his favorite driver, Jeff Gordon. More likely, though, he’ll have to settle for watching him on TV.