Arrangements have been made by Thomas Family Funeral Home in Minot. There will be a memorial service in North Dakota. 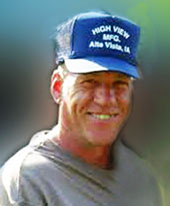 Randy worked for Loenbro Pipe Line of Epping, N.D., in the oil fields running heavy equipment. Previously and for more than 20 years, he owned and operated the welding business, High View Manufacturing, in Alta Vista, Iowa. He did everything from building large trailers to welding leaky cattle water tanks. Part of his business was making equipment for the swine industry. He also crop farmed and raised hogs for years ever since he was just a young boy. He built many metal buildings, helped build houses in his teen years and built his beautiful home in Alta Vista on his acreage. There wasn’t anything he couldn’t do. He had many skills and talents and did everything with great skill, dedication, perseverance and perfection.

He lived in different states and towns and enjoyed spending time with his many friends from all over.

Randy loved western Montana and Glacier National Park. It was his favorite place to visit. He loved the mountains and parks, airplanes and flying, traveling, fishing, his dogs; breeding, raising and training his registered quarter horses; was a history enthusiast and liked to joke around.

He was preceded in death by his father in 1990; grandparents, Ben and Vera Ashleson and Donald and Hazel Klukow; and aunt and uncle, Leatrice and Julius Spilde.

Online condolences are welcome at www.thomasfamilyfuneralhome.com.

Randy, we love you and miss you.

Isaiah 54:13 “All your sons will be taught by the Lord and great will be your son’s peace.”

“My dear son, rest in peace in the arms of Jesus.”