A memorial service for Robert A. Dorman, 86, of Albert Lea will be at 11 a.m. Thursday at United Methodist Church in Albert Lea. The Rev. Tom Biatek will officiate. Visitation will be from 5 to 7 p.m. Wednesday at Bonnerup Funeral Chapel in Albert Lea, and again one hour prior to the service at the church. 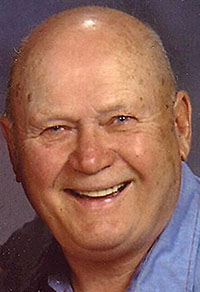 Robert was born Aug. 26, 1927, on a farm near Freeborn to Ruth and Adolph Dorman. He went to school in Freeborn and later in Albert Lea.

He was drafted into the United States Army in 1945, serving with the Corps. of Engineers in Germany until his honorable discharge in 1947. He then worked various jobs in construction.

Soon after, he joined the National Guard active duty in 1951 during the Korean War. His main duty was training troops in Fort Rucker, Ala. In 1953, he returned home from his duty in the service and started working for Queen Products and worked there for 33 years until they closed the plant and he retired.

Bob married Dolores Payne on June 12, 1948, at United Methodist Church. He and his “bride” were married more than 65 years.

He was a member of United Methodist Church, the American Legion, a life member of the VFW and also the Moose Lodge. He served as the post commander, gun safety instructor, organized district youth activities and was the senior activities director. He was very proud of being a member of the VFW for more than 30 years, and only missed one state convention in that time.  He also was very proud of donating more than 18 gallons of blood at local blood drives.

His hobbies were deer hunting, as well as fishing, bird watching, playing cards and gardening. He was very good at woodworking. He enjoyed the trips up to their cabin on the “40” acres up north. He liked the winters at their home in McAllen, Texas. For years he was in a bowling league and enjoyed golfing in the summer.