Russell Henry Nelson was born to Henry and Ruth Nelson, May 19, 1920, on a farm near Alden. He was confirmed at the Danish Lutheran Church and attended the country schools. He served his country in the Army during World War II. He married Mary Jean Mason on June 28, 1952, and they had five children. Russell drove a semi truck most of his working career for Haddy Suncrest Farms, which took him and his family to Minnesota, Arizona and California. After returning to Alden, he worked and retired from Miami Margarine. Upon retiring, he moved to the Hillman area to his beloved Heidi Acres where he continued to live until recently. 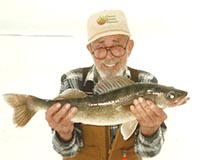 Russ was an avid sportsman and instilled his love for hunting and fishing in his children and grandchildren. November was his favorite time of year because it meant the guys would come up to deer hunt on his property. Last season, he was still directing the hunters when his grandson Chris shot a deer. He was at one with nature and enjoyed gardening, chopping wood and four-wheeling.

He will be missed deeply by his wife, Mary Jean who is at Regina Nursing home in Hastings; daughter Debby (Mark) Merritt of Farmington; Russ (Bonnie) Nelson of Austin, Richard (Lori) Nelson of Albert Lea, John Nelson of Hillman, and Andrew Nelson of Edina. Grandchildren Chris (Nichole) Jacobs, Sally (Tim) Anderson, Heidi (Bryce) Brenneman all of Farmington, Alex (fiancé Kimberly Dietrich) of Austin, Zachary Russell Nelson of Fort Hood, Texas, Jennifer (Charles) Parzych of Columbia, Missouri, Mollie Nelson of Austin and Abby Nelson of Hillman. He loved his great-grandchildren Trayton and Gavin Anderson, Lily Parzych, Hanna Brenneman and was excited two more are on the way. Everyone loved to go to Old Timer’s to hunt, fish and have bonfires.

A memorial service was at White Funeral Home in Farmington on Feb. 25, and burial followed at Alden Cemetery.