A second slide at the Albert Lea Aquatic Center. New bleachers for City Arena. A splash pad by the North Broadway parking lot. A dog park. 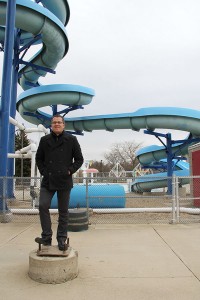 Albert Lea City Manager Chad Adams stands on a footing for a drop slide that has been proposed for the Albert Lea Aquatic Center since the curvy slide was installed in 1998. – Tim Engstrom/Albert Lea Tribune

The city budget process each year results in several proposals being placed on hold. The city places these items on a wish list, and many major projects have remained there for years.

Just like how the Minnesota Department of Transportation keeps track of projects it wants to fund in future budget years, the Albert Lea city government does the same, like many other municipal governments.

Most of the items have approximate costs. Items on the Albert Lea wish list are:

• Downtown benches and tree guards, estimated at $1,000 each.

• Additional banners to hang on streetlights of East Main Street and Broadway, estimated at $80-100 each.

• A slash pad for the grassy area north of the North Broadway parking lot, estimated at $205,000.

On many of the projects, the city is waiting for community support, Adams said. For example, Lou-Rich stepped up to provide tree guards for downtown and Alliant Energy is providing benches. People likely won’t find the items on the wish list in 2015.

A dog park has been on the list for several years, as a handful of residents desire one. However, the city hopes they can offset the expense by raising funds. Adams said the city has mulled various locations — Brookside Park, Frank Hall Park and the area of the Blazing Star Landing across from the T-intersection of Front Street and Frank Avenue.

Visit the city pool sometime and meander over to the area near the stairs for the existing curvy slide. Notice footings that hold nothing. They are just footings. Those are in anticipation of the construction someday of a second water slide — a drop slide — that hurls sliders into the existing pool.

When the city approved constructing the curvy slide and its receiving pool in 1998, the drop slide was cut to save money. The council had anticipated building it later.

Adams said the city is hoping to install a climbing wall at the pool in 2015. The wall has climbing notches, and people — usually children — climb it, then launch themselves into the pool.

Other recreational projects are on hold because the city is using the parks budget for other projects. It is entering the second phase of constructing Tiger Hills Park along Paradise Road and installing upgrades to the Edgewater Bay Pavilion at Edgewater Park. The pavilion, known for its poor acoustics, will get acoustical panels this year, and the city will install heating and cooling systems so the building can be functional year-round.

The City Arena has had many improvements in the past five years: a blanketed dehumidifier, new compressors to chill ice, a cooling tower to remove heat from the compressor, heaters to warm fans, new metal shingles, a locker room with a players’ lounge, a recreation room, a revamped upstairs lounge, a speaker system and new coaching offices. Some were paid by the city, often offset by the cost of ice rental, and some were paid by the now-defunct Albert Lea Thunder.

However, the bleachers, installed in the mid-1970s, barely meet state regulations. The company that manufactured them is no longer in business, so the city cannot get replacement parts. The wish-list cost says $350,000, but city officials have at times estimated replacement to be as much as $500,000. Cuts to local government aid from the state in past years delayed intentions to seek new bleachers. If LGA funds remain strong and, as Adams and other city officials have said, business sponsorships aid in offsetting costs, replacing the bleachers might be a reality.

Adams said improvement of the channel between Albert Lea and Fountain lakes near the former Mexico Lindo restaurant isn’t on the wish list, but he hopes to get it on the city’s capital improvement plan. He also spoke of a bike trail along the channel connecting the route around Fountain Lake to the Blazing Star Trail.

He said both of those projects are contingent upon receiving other sources of funding besides city coffers within the next five years.

“We have a difficult time keeping up with those items,” he said. “It has been a challenge.”

The wish list, he said, is a way to recognize great ideas — often proposed by residents — so if the community comes through to assist the city with funding, the records are in place.