Funeral Services for Tom Falk, 48, of Maple Grove, formerly of Albert Lea, will be at 1 p.m. on Saturday at First Lutheran Church in Albert Lea. The Rev. John Holt will officiate. 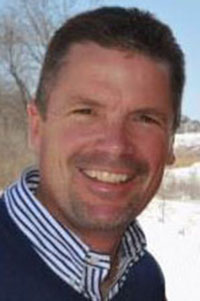 Visitation will be from 10 a.m. until the time of the service at First Lutheran Church. Bonnerup Funeral Service in Albert Lea is assisting the family.

He was born May 16, 1965, in Albert Lea as one of three sons of Donald and Peter (Hoese) Falk. He graduated from Albert Lea High School with the class of 1983, and then obtained his Bachelor of Science degree in business from  University of Wisconsin- Eau Claire.

He married Cindy Nielsen Sept. 1, 1990, at First Lutheran Church and they made their home in Albert Lea.

Tom was a great sports enthusiast. He passionately played and coached hockey. Enjoying a good game of golf with his family and best friends was his favorite hobby.

He loved music, especially country, with songs by Garth Brooks among his favorites.

He enjoyed taking walks, especially with his “special love” Cindy at his side. He loved keeping his family close; they all enjoyed being together.

Tom was well respected by his friends and co-workers and will be remembered as always being genuine. He showed love to his family every day, and was a great husband, dad, son, brother, son-in-law, brother-in-law, uncle and friend.