Funeral services for Wesley R. Crowe, 77, of Albert Lea, formerly of Hartland, will be at 10:30 a.m., Friday at Cross of Glory Lutheran Church in Hartland. The Rev. Dennis Frank will officiate.  Interment will be in Hartland Cemetery with military honors accorded by members of the American Legion and VFW Honor Guard. Visitation will be from 4 to 6 p.m. Thursday at the Bayview/Freeborn Funeral Home. Online condolences are welcome at www.bayviewfuneral.com. 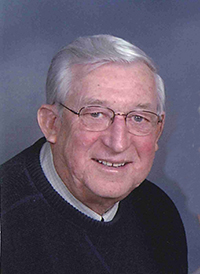 Wesley died surrounded by his family on Tuesday, March 18, 2014, at his home from complications of stomach cancer.

Wesley Russel Crowe was born on Sept. 11, 1936, on his parent’s farm near Hartland. He attended District 8 Country School, Hartland Grade School and graduated from Freeborn High School in 1954. Wes was a life long member of Cross of Glory Lutheran Church. He was an active member of the church council and served as president. He was a member of the New Richland Hartland School Board from 1970 to 1979, and was chairman of the board for six years. He also served on the Hartland Creamery Board during his farming years. On Oct. 25, 1958, Wesley was united in marriage to Jane Johnson at Cross of Glory Church. Wes farmed in his early years and then went on to work in sales at Hartland Hardware. He later purchased the business, renaming it Hartland Farm Equipment. He spent hours each week grooming and mowing his lawn. Wes loved to travel, and took trips to Spain, Monte Carlo, and spent two weeks in Norway where he saw his mother’s family farm. He enjoyed travelling across the U.S. and taking trips to Iowa to see his son, daughter, daughter-in-law and grandchildren. Wes loved watching the Twins and the Vikings, reading “Old Allis News” and “Antique Tractors” and spending time with family and friends.

Memorials are preferred to Cross of Glory Memorial Fund for new pew Bibles or to the donor’s choice.