When the leaves fall, squirrel nests are easy to spot

“Everything is nearly copacetic. Yesterday was a bad day. I lost a Pop Tart. I spent the day with Still Bill and Weasel. Still Bill has a lot of thunder in his mouth, but not much lightning in his head. His feet are so big, they are in separate zip codes. He claims he’s not fat. He says his abs are swollen from doing too many sit-ups. Weasel was born missing a toe on one foot. He still thinks 5+5 = 9. As soon as he learned how to walk, Weasel’s mother pointed him toward the door. Weasel told me that he replaced a couple of fenders on his old truck. It’s too old to be an antique. One of the nuts had corroded onto the bolt. In order to free it, Weasel heated the nut with an acetylene torch. Thanks to that, he was able to remove the nut. He seemed surprised the procedure worked and hadn’t a clue as to why it was successful. I explained that when he heated the nut, it grew larger and released its grip on the bolt.”

“Did he believe that things expand when heated and contract when cooled?” I say.

“He didn’t until I told him that’s why days are longer in summer and shorter in winter.”

A red-tailed hawk perched regularly in the tree. A light surrounded by shadows. It was the raptor’s private address. It was hunting by using its keen eyesight to find prey. I nicknamed him Boris Badenov (from the “Rocky and Bullwinkle” cartoon) and imagined him trying to catch mouse and squirrel. 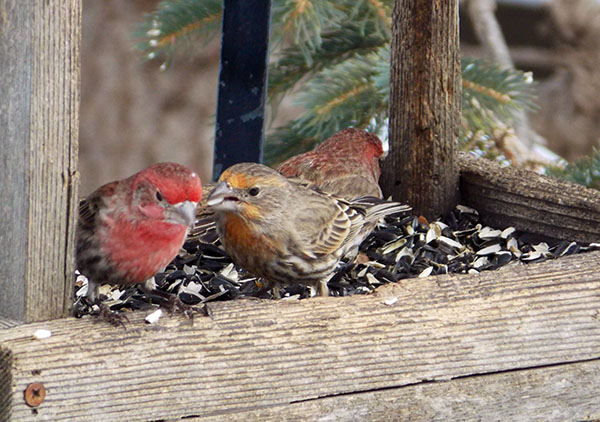 I watched the bird with an appreciation forged through years of seeing and not seeing things.

I was reminded of the words of Thích Nhat Hanh, “Waking up this morning, I smile. Twenty-four brand new hours are before me. I vow to live fully in each moment and to look at all beings with eyes of compassion.”

I look in wonder at the world.

Glenda Yost of Walters sent a photo of a large nest of leaves in a tree and wondered as to its identification. It’s likely a tree squirrel drey. When leaves drop, squirrel nests or dreys are easy to see. They are usually situated about 30 feet from the ground, where two limbs meet. I see many in oak trees, likely because of the available acorns. Built in summer or early fall, a drey begins as a collection of small, gnawed-off branches bearing green leaves. Even though they brown in winter, the leaves surrounding a drey continue to cling tightly to their branches because they were harvested before the tree began the process of shutting down and shedding leaves. The branches are loosely woven into a hollow sphere, the inner surface of which is lined with a variety of materials, including grass, moss, leaves, shredded bark and pine needles. The outer layer of leaves helps shed water while the lining insulates against cold. A single entrance hole faces the tree trunk. Some dreys appear flat or incomplete. They may be evidence of a warm-weather sleeping platform or the rough efforts of young squirrels. Squirrels often build a couple of dreys, giving themselves another shelter should one be disturbed by a predator or overrun with fleas or lice.

Carol Lang of Albert Lea asked about a house finch with unusual coloring, an orange tint. The red of a male house finch comes from pigments contained in its food during its molt. The more pigments in the food, the redder the male. Research has shown that females prefer to mate with the reddest male they can find, likely judging him to be a capable mate who would be an excellent provider for feeding the nestlings.

I received this forwarded email regarding a recent column on passenger pigeons.

My grandfather witnessed the flock that flew through St. Paul on June 2, 1884 as was reported by E. B. Swanson in “The Use and Conservation of Minnesota Wildlife” for the Minnesota DNR. “A great flock of pigeons flew over St. Paul at dawn. The birds flew so low, many were killed with clubs and stones. The ordinance against the use of firearms within the city was disregarded. Several people killed three dozen birds on their own premises. Those that went to the bluffs got 50 to 60 in an hour. All agreed that much sport has never been had in the city before.”

“Though I might travel afar, I will meet only what I carry with me, for every man is a mirror. We see only ourselves reflected in those around us. Their attitudes and actions are only a reflection of our own. The whole world and its condition has its counterparts within us all. Turn the gaze inward. Correct yourself and your world will change.”—Kirsten Zambucka

“God sleeps in the minerals, awakens in plants, walks in animals, and thinks in man.”—Arthur Young