The Cuban Island Restaurant opened in October and since then word has spread about the quality of the cuisine. 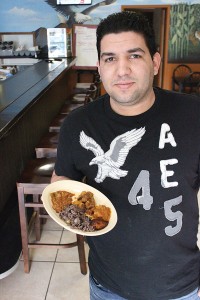 Owner Lyan Martinez escaped Cuba eight years ago on a small boat. He and others didn’t head north across the Straits of Florida like most refugees from the communist-controlled island. They headed south out of the Gulf of Batabano and then westward across the Caribbean Sea seeking Mexico.

He said they were afloat for eight days before being picked up by a Mexican vessel. Then he spent time in a Mexican jail before securing his release through his father in Florida. He eventually made his way to relatives in Albert Lea, where he dreamed of opening up a restaurant.

The Cuban Island Restaurant is his American dream.

• It’s not spicy hot like Mexican food. It has its own distinct flavors, like sweet, salty or citrusy — or all three. “Lots of Mexicans come in here to eat Cuban food for the first time and say, ‘Oh, it’s good. It’s different.’”

• Cuban food has more in common with Caribbean cuisine than with Mexican. People won’t find burritos and tacos. They will find dishes like “old clothes,” which is shreds of meat and vegetables that resemble strips of rags, as well as fricasseed food — cut into pieces and stewed in gravy.

• The food at his restaurant is made with all-natural spices. Nothing is premixed from a can. It’s all made from scratch.

• Cuban food typically has a different sauce for each meat, rather one sauce for everything. He said it is how they make food at home.

• As a result of being the first and last colony of Spain in the Caribbean, Cuba produced cuisine highly influenced by Spain, but it fused it with African and Caribbean food.