The Austin Bruins kept their season alive by playing their best hockey at the right time in Bismarck in Game 4 of the NAHL Central Division finals Saturday.

Austin scored two third- period goals and survived two big penalties in the final period to beat the Bobcats 4-3. Now the Bruins are one win from earning the franchise’s first ever trip to the Robertson Cup. 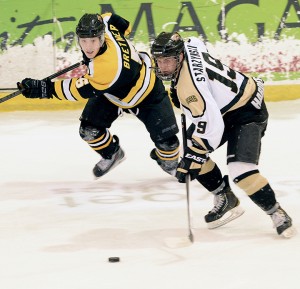 Bismarck’s Filip Starzynski and Austin’s Josh Bretner battle for the puck in the second period. — Will Kincaid/Bismarck Tribune

“We’ve been talking about how we haven’t brought our ‘A’ game,” said Austin head coach Chris Tok. “They poured their hearts out onto the rink (in this game) and this team believes that when they do give everything, they’ll win.”

Austin will host Game 5 against Bismarck at 7:05 p.m. tonight at Riverside Arena.

Austin entered the third trailing 3-2, but Luke Dietsch and Sam Kauppila scored back-to-back goals in a two-minute stretch to put the Bruins up for good.

The Bruins didn’t hang on to the win with ease as Jake Arroyo was ejected for checking from behind with 9 minutes, 52 seconds left in the game, and the Bruins’ all-time leading scorer Jay Dickman, had to sit the game’s last eight minutes and 20 seconds after he was given an unsportsmanlike conduct penalty.

Austin goalie Nick Lehr stopped all 11 shots he saw in the third, and he finished with 34 saves in the win.

“They stuck with it. There was some panic, even from myself,” Tok said. “We’d never been there before, the franchise had never won in that weekend, and we were facing adversity. We said before the game we will face adversity, and we will overcome it.”

Austin will now play its most important home game in the franchise’s four-year history. If the Bruins can beat Bismarck, the Bruins will move on to the Robertson Cup. If Austin loses, it will watch the Bobcats end its season for the third straight year.

Tok is expecting a big turnout for the game — which will be the third playoff game in four days for both teams.

“Our fans are always there. The word spreads in this town, and it’s us and Bismarck,” he said. “They’ll show up in droves, and they’ll support the boys. It’s going to be a big boost for our guys to see our fans cheering us on. This is where we hope home ice advantage pays off.”