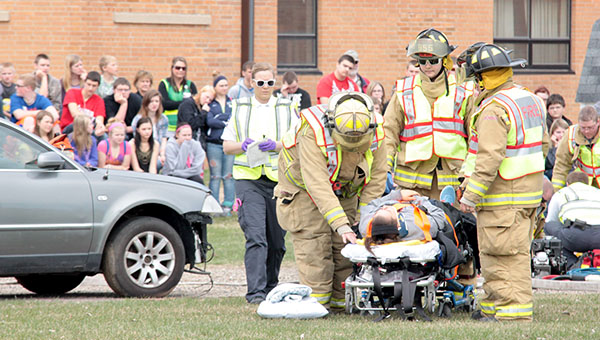 Emergency personnel attend to Katie Hanson, a backseat passenger, in a mock crash at Glenville-Emmons High School on Friday. A mock crash is demonstrated at the school every three or four years just before prom. — Brandi Hagen/Albert Lea Tribune

GLENVILLE – The fatal rollover in Glenville on Friday wasn’t real, but the message was.

“Put that cellphone down and live another day,” Freeborn County Sheriff Bob Kindler concluded to Glenville-Emmons High School students at a mock crash near the football field. 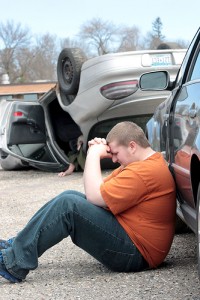 Austin Beseman, a senior at Glenville-Emmons High School, sits beside a Volkswagon Passat Friday during a mock crash at the school. Beseman played the role of a distracted driver who caused the fatal rollover of a Pontiac Grand Prix with three occupants. — Brandi Hagen/Albert Lea Tribune

The scene of a crash was played out as prom and graduation nears to remind students to rid themselves of distractions and to drive safely.

Four students played out the scene for the rest of their classmates. Austin Beseman, a senior, was the driver of a Volkswagon Passat. Beseman, who was texting on his phone, rear-ended a Pontiac Grand Prix with students McKenna Cech, Sam Johnson and Katie Hanson inside. Upon impact Cech, the driver of the Grand Prix, overcorrected, and the car rolled.

When students filed out of the school and into the bleachers, they saw Hanson crawl out of the upside down Grand Prix and run around screaming in panic because Cech was hanging out the back passenger window and Johnson was laying face down in the grass. Beseman was

seated on the ground against his car with his hands to his head.

Students watched as emergency personnel responded to the scene like they would in a real situation. First came the state troopers and sheriff’s deputies, then the firefighters, ambulance, Mayo One and a hearse.

The scene, while not real, caused some students to cry while others seemed to laugh. 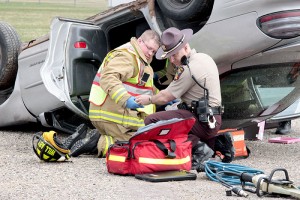 Shawn Willaby, a Glenville firefighter, and Scott Crabtree, a state trooper, give medical attention to McKenna Cech during a demonstration. In the mock crash, Cech was the driver of a Pontiac Grand Prix which was rear-ended by a distracted driver injuring two and killing one. — Brandi Hagen/Albert Lea Tribune

When Kindler read a press release similar to what he would give to the media in a real situation, he had the students’ full attention.

“These aren’t easy to write,” he said. “And they all sound the same. The only thing I really have to change is the name.”

Kindler also spoke on the importance of seat belts. In the mock crash everyone except for Johnson was wearing their seat belt.

“There is room to live inside the vehicle,” Kindler said. “When Sam was ejected and the 3,500 pound vehicle rolled over him, he was killed instantly. A two-second click could have saved his life.”

Speaking from the heart, Kindler told students he is tired of writing press releases like the one he read and tired of attending funerals in gymnasiums.

“Those are supposed to be places for fun, not funerals,” he said. 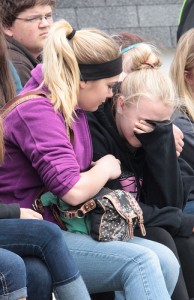 A mock crash and memorial service at Glenville-Emmons High School on Friday had students emotional as they watched the events play out. — Brandi Hagen/Albert Lea Tribune

After all of the students involved in the accident were taken away by the different agencies, the students went into the gym for a mock memorial for Johnson. A casket sat at the front of the room.

Following a video highlighting Johnson’s life, state trooper Scott Crabtree and a responder from Mayo One spoke briefly before Johnson’s mother, Sandy, told the student body what kind of a person her son was.

She left the gym crying, but was embraced by Johnson in the hallway.

“I never want to actually truly do this,” Sandy said. “This would be my worst nightmare. I wouldn’t wish it on any other parent.”

Sandy said she was reserved about being involved in the mock crash but decided if she could get through to even just one person it was worth it.

Students were dismissed from the gym back to their classrooms where social workers and members of the Crisis Response team were waiting to talk out what the students had just experienced. 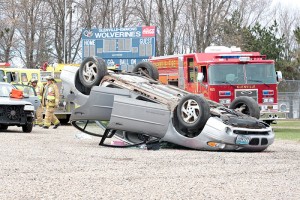 Prior to Friday’s mock crash, there was an Every 15 Minutes program played out, too.

Every 15 minutes the sound of a car collision was played over the intercom, and a student was pulled from class to put on a black T-shirt, have their face painted white and post their self-written obituary on their locker. They weren’t allowed to speak the rest of the school day. 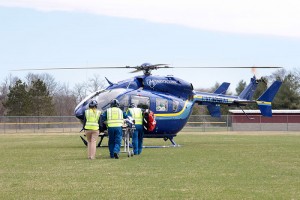 Mayo One responders wheel the driver of the rolled vehicle, McKenna Cech, to their helicopter on Friday. The helicopter landed on the Glenville-Emmons High School football field to take part in the mock crash. –Brandi Hagen/Albert Lea Tribune

The program showed the reality of the statistic that every 15 minutes someone is killed in an alcohol or texting-related crash.

“Most of the students took it pretty seriously,” Rayman said. “And a lot were alarmed that it was every 15 minutes.”

Rayman said the presentations are done every three to four years because if they were done too often they would lose their impact.