A memorial service for Kazimierz “Casey” Dziura will be at 11 a.m. Saturday at St. Theodore Catholic Church. The Revs. Timothy T. Reker and Mike Ellis will officiate. Visitation will be one hour before the service. Military honors will be accorded by local servicemen’s organizations, VFW and American Legion. Online condolences are welcome at www.bayviewfuneral.com. 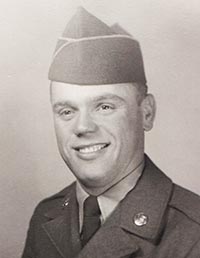 Casey was born Sept. 15, 1926, in Zabludow, Poland, to Mary and Joseph Dziura. He grew up with his older brother Stanley and younger sister Sophie in a house with a straw roof where food was scarce. In the summer they played with a ball made from cow hair. Casey worked for a farmer in exchange for food. He was an altar boy in the catholic church and learned Latin. Casey’s mother, Mary, passed away when the children were young.

In March 1943, at age 16, two German soldiers came to the house and forced Casey to go with them. He and others were then taken by train to Krakow, Poland and then to Barmsted, Germany. There a farmer selected him to work on his farm, first looking at his hands to make sure he had hard working hands. Casey learned the German language, as the farmer did not speak Polish. He milked cows, taking the milk in cream cans by bicycle to town every day.

One day, while working in a hay field, he was bitten on the leg by a poisonous snake. He became unconscious and was taken to the hospital where he woke up with his leg in a sling. While there, he heard the windows rattling and doors banging from bombing nearby. The farmer returned in a week insisting he be released. Not fully recovered, but obeying the farmer, he told the doctor he was well enough to leave. The next day the hospital was bombed.

At the end of World War II, in the summer of 1945, Casey decided not to return to Poland due to poor conditions. He took a train to Hamburg, Germany, to a displaced camp for refugees. He found employment working for the English troops, living in the barracks.

He then moved to Scunthorpe, England, arriving September 1948. There he worked in a cement factory and later in a kitchen as a cook. He enjoyed going out to dance halls with friends in the evenings and took private dancing lessons, becoming very good at the quickstep, tango, waltz and slow foxtrot.

With sponsorship from his aunt, Connie Banowski of Chicago, Ill., he immigrated to the United States on March 22, 1951, sailing for five days on the Queen Mary and arriving at Ellis Island. He took a train to Chicago and met his relatives. After only three months in Chicago, Casey was drafted to the U.S. Army, reporting to Fort Leonard Wood, Mo. in September for basic training in combat engineering.

Before leaving for basic training, Casey’s friend wanted to show him an American farm so they took a train to the farm of John and Julia Pyzick in Wells. Julia’s parents lived in Chicago and were good friends with Casey’s aunt Connie. On the farm Casey met the Pyzick’s daughter Sylvia, his future wife.

In February 1952 Casey was shipped out to Korea via Seattle. He spent 17 days on the troop ship, arriving in Pusan, Korea, and traveling across the 38th parallel. He honorably served his new country by helping build bridges and roads through the mountains for 18 months. In October 1953 he traveled to Camp Carson, Colo., where he received his discharge papers, earning the rank of staff sergeant.

While Casey was in Korea, he stayed in touch with Sylvia, who moved to Chicago and got a job. On discharge from the Army, Casey returned to Chicago and they dated, going to dances and enjoying living in the big city. They became engaged on Easter Sunday of 1955 and were married on Aug. 27 at Holy Trinity Catholic Church in Chicago. Their first son, John, was born in Chicago, but they soon realized they wanted to be closer to Sylvia’s parents and live in a small town. In 1960 they bought their home in Albert Lea where they raised their family.

Casey worked at Queen Products-Almco and later for the Albert Lea Parks Department as park attendant at Edgewater Park. He was a member of St. Theodore Catholic Church for 54 years and also a member of the VFW.

He enjoyed growing vegetables and flowers and tending to his lawn, having the best manicured lawn on the block. He was an avid fan of his children’s and grandchildren’s sporting events.

In June 1990, 47 years after he left, Casey and Sylvia toured Poland. They were able to depart from the tour to surprise his sister-in-law, nieces and nephews while visiting his homeland.

In lieu of flowers, the family requests memorials to an organization of the donor’s choice.