Marguerite Borland Hiemenz, known as “Corky” to her family, passed away with family at her bedside on Friday, March 28, 2014, at the age of 90 while under the care of Halifax Hospice of Volusia and Flager County’s Hospice Care Center in Port Orange, Fla. Born in Hampton, Iowa, to Arthur and Maude Borland, Marguerite was raised in Albert Lea with her five sisters and four brothers. She is survived by her husband, James Hiemenz of Ormond Beach, Fla., and her son, John W. Hiemenz, M.D., of Gainesville, Fla., five grandchildren and seven great-grandchildren. She studied gerontology at George Mason University while working as a senior administrative assistant at the Nuclear Regulatory Commission in Washington D.C. 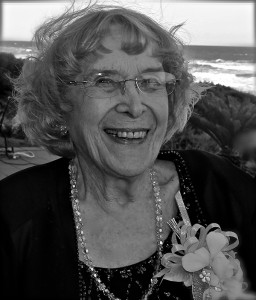 While living with her older sister, Mavis, a wax in the U.S. Army at the time, Marguerite met and married her husband, James, while working at Arlington Hall during World War II. While James was serving as an officer in the Signal Corp in the Army during World War II and the Korean War, the couple lived in northern Virginia in the D.C area where they had their three children, James “Jimmie,” Carol and John. After finishing his service in the Army, Marguerite followed her husband, an engineer for General Electric at the time, and the family lived in Syracuse, N.Y.; King of Prussia, Pa.; McKinney, Texas; Ormond Beach, Fla., during the “Space Race” as James worked on the Apollo Program; and then Reston, Va. After retiring from her position at the Nuclear Regulatory Commission, where she worked while living in Reston, Marguerite returned to Ormond Beach in 1987 where she utilized her degree in gerontology while working as assistant program director at Ormond-in-the-Pines retirement center for several years. Marguerite was an active member of Riverview Methodist Church in Ormond-By-the-Sea, Fla., and had various positions in the local chapter of the National Association of Retired Federal Employees, or NARF. A professional student of history and politics, Marguerite enjoyed using her computer skills for education, research and entertainment. She was an avid reader of mystery novels, loved crossword puzzles, enjoyed animals and cherished her Friday lunches with close friends. However, the most important relationship to Marguerite was her family, touching their lives with love, compassion and her dry sense of humor. We will all miss her greatly. Marguerite is preceded in death by two of her three children, James “Jimmie” who lost his life in Vietnam, and Carol, who passed away after a long illness while under the care of her parents, Marguerite and James, in their home in Ormond Beach.

“If we have been pleased with life, we should not be displeased with death, since it comes from the hand of the same master.” – Michelangelo

Funeral services will be at 3 p.m. Saturday at Bonnerup Funeral Service in Albert Lea. The Rev. Paul Wilberton will officiate. Visitation will be from 4 to 7 p.m.  Friday and one hour prior to the service. Interment will be in Graceland Cemetery in Albert Lea.