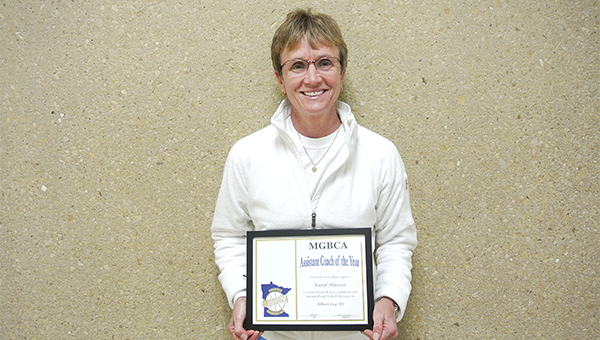 After serving as head coach of the Albert Lea girls’ basketball team for more than a decade, Karol Hansen stepped away from the varsity stage in 2008.

She came back as an assistant coach for the 2012-13 season and has been recognized by the Minnesota Girls’ Basketball Coaches Association for outstanding contributions to the team.

Following the Tigers’ second straight 11-win season, Hansen was selected as the Section 1AAA Assistant Coach of the Year.

“The certificate was (something) a little extra that I didn’t expect,” she said. “The players and the staff made this year memorable.”

“Karol has been an instrumental part of our program since I started here,” Hugstad-Vaa said. “I know she genuinely cares about each and every girl in the program and has a huge heart.”

Hugstad-Vaa, Hansen and assistants Dennis Dieser and Jasmine Henrich inherited a team that had fewer than 10 wins in the previous two seasons combined. Since they’ve taken over, the win totals have been in double digits both years.

Hansen has extensive experience coaching girls’ basketball at the varsity level. She was Albert Lea’s head coach from 1989-94 and 1999-2008, garnering Section 1AAA Coach of the Year honors in 2007. She is also a physical education and adaptive physical education (special needs) teacher at Southwest Middle School and an assistant volleyball and softball coach.

“I respect her so much for all the hard work she has put into this district as a teacher, coach and mentor to so many young women and men,” Hugstad-Vaa said. “She truly is an irreplaceable part of our community, and I’m very fortunate to be able to call her a colleague and friend.”

Hansen said her favorite part of the season was watching Bryn Woodside and Sydney Rehnelt pass the milestone of scoring 1,000 career points.

“That’s pretty unique,” she said. “It shows dedication. Working with the players is the best part.”

According to Woodside, Rehnelt and Megan Kortan — Albert Lea’s three captains — Hansen helped create a family atmosphere in the gym.

“She’s always positive and encouraging both on and off the court,” Rehnelt said. “She looks for the best in all of her players and always helps Huggy with whatever is needed and more.”

The end of her coaching career isn’t in sight, Hansen said.

“I’ll be coaching as long as I’m teaching and working in the school district,” she said. “I’m just glad that Lindsey gave me the opportunity to be back in the program.”