Funeral Services for G.M. Ardell Gunderson will be at 10:30 a.m. Friday at Hartland Evangelical Lutheran Church in Hartland. The Rev. Shawn Stafford will officiate. 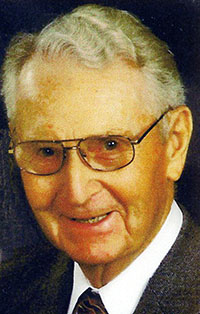 Interment will be in Hillcrest Cemetery. Visitation will be from 4 to 6 p.m. Thursday at Bonnerup Funeral Service in Albert Lea and one hour before the service at the church.

Gordon Merlin Ardell Gunderson was born on the farm in Freeborn County on Jan. 20, 1926, the youngest of nine children of Alfred and Olga (Tommeraasen) Gunderson.

He was united in marriage to Geraldine Faye Cook on July 11, 1948, at Trinity Lutheran Church in Albert Lea.

Ardell lived his life farming the land he so loved. He farmed near Twin Lakes until spending his retirement years as a custodian for District 241.

He was currently a member of Hartland Evangelical Lutheran Church. Throughout the years he enjoyed singing in church choirs.

He had been a 4-H leader and enjoyed the years he and Geraldine danced with the Grapevine Twist Square Dance Group.  Ardell’s other interests included boating, snowmobiling, trains and World War II airplanes.

Even after retiring from farming, Ardell enjoyed keeping his hands in the earth. He tended to a large garden, sharing some of his bounty at the Albert Lea Farmers Market.

In lieu of flowers memorials are suggested to the Hartland Evangelical Lutheran Church college fund.